Director, represented in the U.S. by A Common Thread, re-teams with Black Cherry for a Western spoof.

LOS ANGELES— For a new spot for snack food giant Chipita, director Peter Dietrich created a scene straight out of a classic Western. A clean-cut stranger walks into a bar and engages in a test of marksmanship with a surly tough guy. The tough guy shoots a silver dollar out of the air. The stranger responds, incongruously, by firing at a package of baked rolls and, seemingly, missing wildly. A moment later, the stranger quiets the laughter of the cowboys in the saloon when he opens the package and reveals that all the round bread chips have holes.

The spot was conceived by Greek agency Black Cherry. “They came up with a very funny script that has an unexpected twist that’s directly related to the product,” says Dietrich, who’s represented in the U.S. by A Common Thread. “It’s a simple story, but hilarious.” 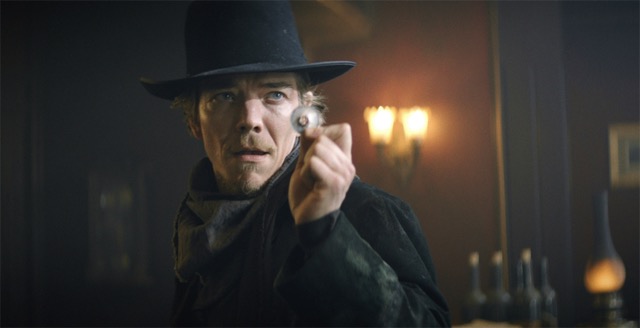 The concept may be simple, but Dietrich executes it in lavish detail. He shot the spot on a sprawling Western backlot in Hungary and employed a cast that included more than a dozen hand-picked extras. The costumes and props are straight out of High Noon (or, perhaps, Django Unchained). Dietrich also makes clever use of familiar gunslinger tropes, like a table of roughnecks who whip out their six-shooters in response to a suspicious sound.

Dietrich has previously teamed with Black Cherry and Chipita for classic movie spoofs. An earlier spot parodied Titanic with a giant croissant substituting for the iceberg. Another pokes fun as crime family movies as “Mr. Pizzeti” testifies before Congress about the cheese content of his snack product.

Director: Peter Dietrich (represented in the U.S. by A Common Thread)