LOS ANGELES —  The Hollywood Section of SMPTE®, the organization whose standards work has supported a century of advances in entertainment technology, recently hosted students from colleges and universities across Southern California for Career Day, a day-long event focused on technology-oriented employment opportunities in the media and entertainment industry. The event included speeches, roundtables, and panel discussions from industry leaders on subjects ranging from job-seeking strategies to emerging technologies employed in cinema, broadcast, and virtual reality (VR) production. 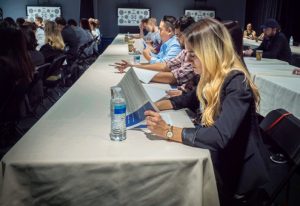 “We want to excite young engineers and other technically minded students about the possibility of careers in the media and entertainment industry,” said SMPTE Hollywood Chair Jim DeFilippis. “Today, people with math, science, and engineering skills are in high demand in every area of the industry from creating visual effects for movies to designing virtual reality systems.”

The keynote address was delivered by VR Director and Practical Magic President Matthew Lewis, who discussed behind-the-scene roles engineers play in creating Hollywood magic. His speech touched on new movie-making technologies, such as robotic VR cameras, remote telemetry, and next-generation pyrotechnics. “Engineers with creative problem-solving skills are essential to the entertainment process,” Lewis observed. “Companies like ours need talented individuals who can bring that to the table.” 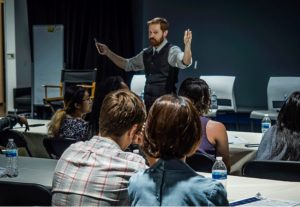 Students who attended the event received practical advice from studio executives and recruiters on how to launch and sustain productive careers. “Several speakers made the point that both networking and training are essential to establishing yourself in this industry,” said USC student Angela Chan. “Relationships will help get you in the door, while your skills will ensure you’ll thrive once you’re in the room.”

DeFilippis hopes Career Day will become an annual event. “We received positive feedback from students and presenters alike,” he said. “We believe an important part of SMPTE’s mission is to encourage the development of talented young people and to foster dialogue between today’s leaders and the next generation. These students are our future.”

SMPTE’s global membership today includes more than 7,000 members: motion-imaging executives, creatives, technologists, researchers, and students who volunteer their time and expertise to SMPTE’s standards development and educational initiatives. A partnership with the Hollywood Professional Association (HPA) connects SMPTE and its membership with the businesses and individuals who support the creation and finishing of media content. Information on joining SMPTE is available at smpte.org/join.