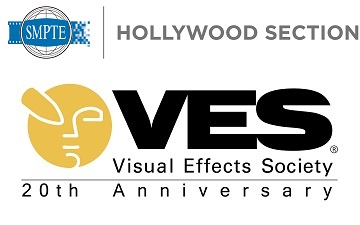 LOS ANGELES —  The Hollywood Section of SMPTE®, the organization whose standards work has supported more than a century of advances in entertainment technology, and the Visual Effects Society (VES) of Los Angeles will explore the challenges of restoring and preserving entertainment content in a joint meeting scheduled for Tuesday, July 17.

The restoration and preservation of motion picture and television content are complex and challenging issues. Content owners must decide what should be saved and how it should be preserved, and they must consider who will cover the costs and how future generations will access content from today and the past 100 years. In this special joint meeting of the SMPTE Hollywood Section and the VES Los Angeles, some of Hollywood’s brightest minds in restoration and preservation will discuss the pioneering work their companies are doing to secure the future accessibility of valuable content and, moreover, what others can do to help.

“The art and science of film restoration and preservation have improved significantly in recent years, but new challenges are always arising,” said SMPTE Hollywood Section Chair Jim DeFilippis. “At our July meeting, we’ll hear from people working at the front lines of a field of vital importance to everyone involved in the entertainment industry.”

Topic: The Business, Science, and Art of Film and TV Restoration and Preservation

The Hollywood Section of SMPTE® was initially organized as the West Coast Section in 1928. Today, as its own SMPTE Region, it encompasses more than 1,200 SMPTE Members with a common interest in motion-imaging technology in the greater Los Angeles area. The Hollywood Section offers free meetings monthly that are open to SMPTE Members and nonmembers alike. Information about meetings is posted on the Section website at smpte.org/hollywood.

For more than a century, the people of SMPTE (pronounced “simp-tee”) have sorted out the details of many significant advances in media and entertainment technology, from the introduction of “talkies” and color television to HD and UHD (4K, 8K) TV. Since its founding in 1916, SMPTE has received an Oscar® and multiple Emmy® Awards for its work in advancing moving-imagery engineering across the industry. SMPTE has developed thousands of standards, recommended practices, and engineering guidelines, more than 800 of which are currently in force today. SMPTE Time Code™ and the ubiquitous SMPTE Color Bars™ are just two examples of SMPTE’s notable work. Now in its second century, SMPTE is shaping the next generation of standards and providing education for the industry to ensure interoperability as the industry evolves further into IT- and IP-based workflows.

SMPTE’s global membership today includes more than 7,000 members: motion-imaging executives, creatives, technologists, researchers, and students who volunteer their time and expertise to SMPTE’s standards development and educational initiatives. A partnership with the Hollywood Professional Association (HPA) connects SMPTE and its membership with the businesses and individuals who support the creation and finishing of media content. Information on joining SMPTE is available at smpte.org/join.

About the Visual Effects Society

The Visual Effects Society is a professional global honorary society dedicated to advancing the arts, sciences and applications of visual effects and to upholding the highest standards and procedures for the visual effects profession. It is the entertainment industry’s only official organization representing the extended global community of visual effects practitioners, including supervisors, artists, producers, technology developers, educators and studio executives. VES’ more than 3,800 members in 35 countries worldwide contribute to all areas of entertainment – film, television, commercials, animation, music videos, games and new media.