Images of the band are multiplied in a kaleidoscopic display to form a moving statement on human connections.

New York City— Indie rock sensations Young the Giant appear as tiny dancers moving in gracefully undulating patterns in their new music video Simplify. Conceived and directed by Kyle Sauer and produced by Derby, the video marks the band’s first release since their 2016 breakout album Home of the Strange on Atlantic Records.

In the video, images of the band multiply and are joined by dancers moving in rhythm. According to Sauer, the mesmerizing visuals are meant to echo the theme of the song whose lyrics evoke a yearning for simplicity. “It’s about connections and how genuine relationships can make a complicated, busy world feel manageable,” Sauer explains. “Visually, we created a digital environment that feels like a desert and is populated by avatars that walk past each other. When two people do notice each other, the colors change and the desert becomes an oasis.” 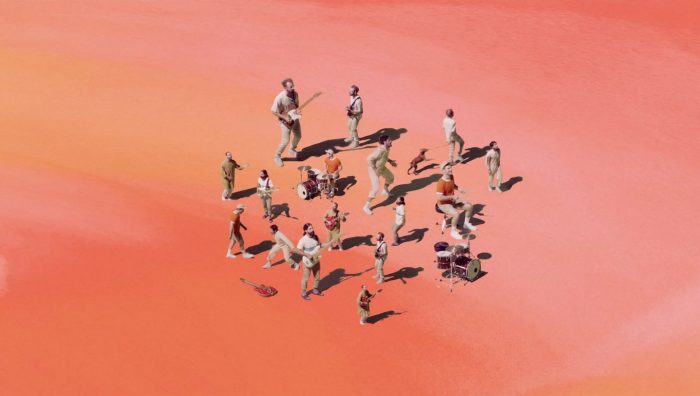 Sauer shot the video on a green screen stage in Los Angeles. Working with choreographer Lisa Eaton, the director recorded dozens of takes of the band executing precisely timed action. Some of the video’s most striking images were shot from a camera suspended 30 feet above the action. The imagery was layered in post-production and composited over a series of digitally-produced water color backgrounds created by artist Iain Burke. “We created a routine of interlocking moves that would look good in the final rendition and also tell an underlying love story,” Sauer says. “The routine is meant to look digital, a little glitchy and even bizarre, and the band’s acting is a bit playful. We didn’t want to seem like we were taking ourselves too seriously.”

Derby managed production through post with Kyle Sauer editing. VFX, color grading and finishing were handled by The Underground and VFX artist Nic Seresin. Editing and compositing were complicated as some scenes involved more than 60 layers of coordinated action. “Kyle had a clear vision and knew exactly how to execute it,” says Derby Head of Production Eli Ash. “He spent a lot of time in pre-production with the band honing the idea and working out his technique. He was detailed in his communication with all departments through each phase of production, so the final product perfectly matches his original idea.”

Sauer, who has a background in design including work with animation powerhouse GIPHY, says he’s drawn to projects that allow him to use his design background and sense of humor to tell stories that are visually daring and emotionally resonant. “I create live-action videos that play like cartoons; they don’t follow the same rules as the natural world,” he says. “I enjoy telling a joke…and making it look good.”

Atlantic Records is using elements from the production in a marketing campaign support the band’s current tour and forthcoming album. The campaign includes GIFs and other social media content inspired by the video.