CHICAGO—STORY director Ron Lazzeretti uses real-life humor to show how GE Appliances is making life easier in a new series of spots out of FCB, Chicago, the agency’s first for the brand since being named its agency of record. The account had been with BBDO, New York, since 1920.

In one spot, a woman poses for a “shelfie” in front of her high-capacity GE refrigerator. Her teenage daughter reacts by rolling her eyes. In another, a man is lightly chided by his wife for letting their toddler daughter drink milk from a measuring cup. He didn’t realize that their GE dishwasher’s Dry Boost feature meant the girl’s plastic sippy cup was ready for use. “Each one feels like you’ve flipped a switch and caught a glimpse of someone’s life,” says Lazzeretti. “A little magic happens and then it’s gone.” 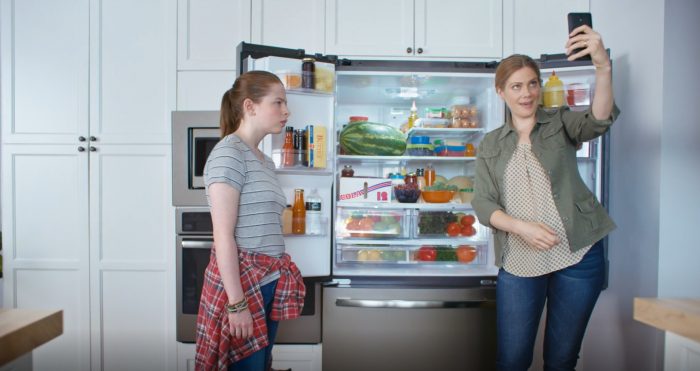 For Lazzeretti, the concepts work because they are simple and draw on real life experience. To maintain the slice-of-life feel, he directed the actors with a light touch and allowed the humor to emerge from their personalities. “A big part of the job is casting, finding actors who fit naturally into the roles,” he observes. “When the spot’s cast properly, I don’t have to be prescriptive with the actors. I simply create an atmosphere where they do what they do.”

Lazzeretti’s restrained approach results in spots that feel refreshingly honest. “Even working with a very young child, we got some great stuff,” he says. “There’s a moment near the end of the spot, where the dad throws his hands in the air and shrugs as if to say, ‘I don’t know,’ and the little girl spontaneously mimicked his action. It is as if she is saying, ‘Me neither.’ It was something that we couldn’t have planned, but the environment we created allowed it to happen.”