Adelaide, South Australia— Rising Sun Pictures Education measures its success one student at a time. It takes great pride in the number of students who’ve come through its program and gone onto successful careers in the visual effects industry. RSP graduates are today doing incredible work on movies, television shows, commercials and games at studios across Australia and worldwide.

Monika Batchelor completed RSP and UniSA’s Graduate Certificate in Composting and Tracking program in 2016. She then beat long odds by securing a visa to enter the United States through the country’s green card lottery system. (Each year, more than 20 million people apply for a pool of 50,000 visas.) After undergoing additional training in Los Angeles, she landed a job as an in-house compositor at Hulu. From there, she moved to Lola Visual Effects where she was a junior Nuke artist on Goosebumps: A Haunted Halloween and the upcoming release Captain Marvel. She is now employed as a roto/paint artist at Luma Pictures in Los Angeles, working on a studio blockbuster set to land in theaters later this year. 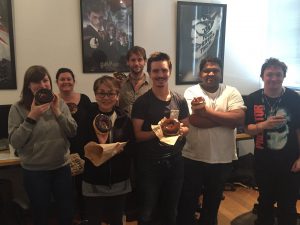 While she might sound like an overnight success, Batchelor looks back on years of hard work. Before entering the training program at RSP, she earned a bachelor’s degree in Multimedia and Digital Arts at Monash University, and studied visual effects and animation at the Academy of Interactive Entertainment. She also did some work at a small VFX studio in Sydney.

Batchelor says that she picked up valuable skills at each step along the way, but it was her experience at RSP that proved crucial to getting her career off the ground. The school’s emphasis on educating students in a working studio environment taught her how to be a professional. “It gave me confidence in my skill set that I hadn’t had before,” she says. “I finally felt ready for the industry.”

At RSP, Batchelor studied the fundamentals of compositing and tracking from teachers who were themselves working VFX professionals. She learned how to take criticism, how to apply that input to make her work better, how to meet deadlines and push toward a common goal. “The best part was seeing how the pipeline worked,” she recalls. “It made me aware of how a studio functions and what’s expected of individual artists. It enabled me to become an artist who can start the workday comfortably, accept feedback early in the process and move forward so less time is wasted.”

Batchelor also benefitted from professional enrichment opportunities provided by RSP. “Having sessions with recruiters was extremely valuable,” she recalls. “We learned what studios look for when they are hiring artists, what makes a good presentation and an effective demo reel. Those soft skills matter. We also had day-in-the-life sessions involving artists from other departments, who told us about their jobs and how our roles fit in.”

While Batchelor’s experience at RSP served as the steppingstone to a professional career, her education is far from over. “My new position at Luma Pictures has a lot of challenging work,” she notes. “I’m enjoying having to re-think how I do things to be more efficient. Each shot is different, so I’m constantly learning. I’m also meeting and working with new people, and I’m having a lot of ‘pinch me’ moments when I see the CG the team is producing. I’ve been extremely fortunate to work on several amazing films in just my first year. I can’t wait to see my name on the big screen!”

For aspiring artists who’d also like to see their names projected on cinema screens, Batchelor advises “persistence and patience.” “I’m here today because I kept trying,” she says. “That may be hard when you face rejection, but it is essential to continue to focus and learn, and to attend as many VFX industry events as you can to network. If you do that, things will work out.”