Following the events of Avengers: Endgame, in Spider-Man: Far From Home Spider-Man must step up to take on new threats in a world that has changed forever.  Ticknor, Lamberti and O’Connell, who previously collaborated on 2017’s mega-hit Spider-Man: Homecoming, faced a host a fresh sound challenges in the new film. Spider-Man: Far From Home is packed with action sequences of spine-tingling intensity and visual surprises beyond anything previously seen in the franchise. “Spider-Man movies always present wonderful opportunities to get creative with sound,” says Ticknor. “Every member of our team was inspired to do his or her best, because it’s Spider-Man…one of the most popular superheroes on the planet.”

“With every Spider-Man film, the audience arrives expecting to be taken on a thrill ride,” adds O’Connell. “Our role was to maintain the intensity, and ensure every sound makes an impact and propels the story forward. We had a great rapport with Jon Watts. He kept pushing us to make it better.”

The sound team, especially, had its hands full concocting sound treatments to support Mysterio as he is a skilled fighter with powerful weapons at his disposal. “Virtually every second that Mysterio is on screen, he’s fully complemented with sound,” notes Lamberti. “As he’s battling the Elemental Creatures, you have the whoosh of his flight suit and the stinging laser strikes of his weapon interacting with the frightening sounds made by the creatures. When composer Michael Giacchino’s music comes in on top of that, it’s amazing, a true ‘wow’ moment.”

Some of the team’s best sound work was applied to the Elemental Creatures. Each of four creatures required a unique set of signature sounds related to its connection to fire, water, earth and wind. Ticknor recalls Watts describing what he wanted to hear when Hydron makes his first appearance, rising with terrifying effect from the ocean. “Jon showed us a video of a deluge system used by NASA to cool launch pads when rockets lift off,” Ticknor recalls. “It was capable of releasing 450,000 gallons of water in a matter of seconds. To create the same effect for Hydron, we blended dozens of water recordings augmented by sound design software. One member of my crew, Chris Diebold, recorded himself making a cannonball plunge into a swimming pool to add to the mix.” 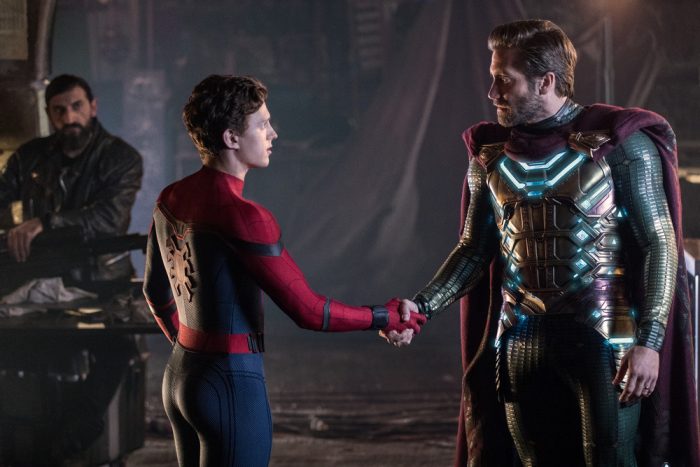 Final mixing was completed in the Cary Grant Theater on the Sony Pictures Studios lot in Culver City with O’Connell and Lamberti working natively in Dolby Atmos. Spider-Man: Far From Home was the first film mixed in the Grant Theater following its recent upgrade to support immersive sound. “The Dolby Atmos format adds depth and richness to the soundtrack; it draws the audience in and allows them to hear details they might otherwise have missed,” says O’Connell. “The sound effects, music and dialogue feel alive. It’s thrilling.”

Ticknor says the finished soundtrack exceeded his expectations and complements the film’s astonishing visuals to deliver an experience that is sure to delight Spider-Man’s millions of fans. “The team knocked it out of the park,” he says. “The film looks and sounds great, and it’s fun to watch. It took a lot of work and a big crew, and I’m very proud of everybody on our team. They worked their hearts out and did an amazing job.”

In U.S. theaters on July 2, Spider-Man: Far From Home took in an impressive $185.056 million its opening weekend, which is an all-time opening six-day record for Sony Pictures, the best six-day opening for a Spider-Man film of all-time and the best six-day opening for a film opening over the Fourth of July holiday. Globally, in its first 10 days of release, the film has grossed an exceptional $580 million worldwide.

About Spider-Man™: Far From Home:

Following the events of Avengers: Endgame, Spider-Man must step up to take on new threats in a world that has changed forever.