Former RSP Student Returns to RSP as a Compositor

Adelaide, South Australia— A little more than three years into her professional career, Francesca Milde has already amassed an impressive credit list as a visual effects compositor. The Adelaide native, who rejoins Rising Sun Pictures this month after a stint with Luma Pictures, Melbourne, has contributed to such films as Alien: Covenant, Thor Ragnarok, Tomb Raider and X-Men: Dark Phoenix. Most recently, she was part of Luma’s team for the current smash hit Spider-Man: Far From Home.

Having harbored a love for movies from a young age, Francesca left home at 19 to study animation and visual effects at The DAVE School in Orlando, Florida. Returning to South Australia, she continued her education through UniSA and Rising Sun Pictures, completing the Graduate Certificate program in Compositing and Tracking in 2016. Shortly thereafter, she was hired by RSP as a junior compositor. 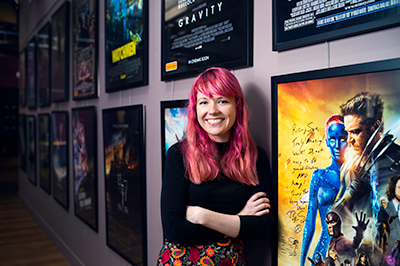 Francesca Milde recently spoke with RSP about her career.

RSP:       How did you become interested in the UniSA/Rising Sun Pictures Graduate Certificate program?

Francesca Milde: It stemmed from my interest in Rising Sun Pictures itself. I grew up in Adelaide and read newspaper articles about the studio’s work on the Harry Potter movies. I loved Harry Potter! I was a massive fan-girl. I went to a presentation at RSP where artists talked about their work on the films, and I thought, ‘Oh my god, that is amazing! That’s what I want to do.’

RSP:       The program you enrolled in focused on compositing and tracking.

FM:        Yes. It was a 12-week intensive course. We spent a lot of time re-doing work that RSP had done for past films, so we got to work on actual footage. That was really good as we could reference how it ended up looking in the film. It helped us understand professional standards…what we should be working towards.

RSP:       Were you impressed by your instructors?

FM:        Yes, our instructor, Jeremy, taught us all the way through. He was very good. Everyone in the class had a different background and were at different levels in terms of experience in visual effects. He quickly got everyone up to the same level so that we could be taught cohesively. Toward the end of the course, we worked on a group project, a short film Jeremy wrote and directed called Midnight Snack. It was about a young sorcerer who uses magic to make a late-night sandwich, but things get out of hand.

FM:        I had a few distinct shots. The biggest was towards the end where heaps of sandwiches are formed… a hailstorm of sandwiches. Jeremy gave it to me as a challenge because of my interest in comp. And it was very challenging, but I learned a lot from that one shot, and I got something I could use on my demo reel.

FM:        Every week, we had a ‘Day in the Life’ presentation where someone from a different department at RSP talked about their job. It gave us a taste for how the various departments run. We were also visited by the HR team who talked about recruitment. They gave us advice on how to apply for jobs, how to build our demo reels, what to include on our resumes. It was amazingly helpful.

RSP:       What did you find most valuable about the program?

FM:        That it was integrated with an actual studio with classes taught be artists working in the industry. They had up-to-date information on how studios are run and what we needed to focus on to get a job done.

RSP:       What happened after you graduated?

FM:        I took a month off, then I sent my demo reel, updated with work I’d done in the course, to RSP. They asked me to come in for an interview and I was hired as a junior compositor.

FM:        Logan, the Wolverine movie. I got thrown in the deep-end, but in a good way. My boss wanted to challenge me as a new recruit. I had a shot that was in a trailer. I found it so difficult at the time, but it taught me to ask for help when you’re struggling and how to navigate a professional setting while completing work on a deadline.

FM:        I stayed at RSP for two and a half years, then, in March, I joined Luma. I came in during crunch time on Spider-Man: Far From Home. That was fun because I’m also a huge Spider-Man fan. Now, I’m rejoining RSP. So, I’ll be back on familiar territory, which is good.

RSP:       Congratulations! Will you be a junior compositor?

RSP:       Congratulations again. Where do you want to go from here?

FM:        I love the work I’m doing in compositing and want to keep developing my craft. One day, I’d like to be a lead compositor. Over the past few years, I’ve learned a lot about the importance of coordinating groups of artists. I also like the creative input lead compositors have, so that’s what I’m working towards. That’s my long-term goal.

RSP:       You seem to have settled on a career path at a young age and made a seamless transition from training to a professional role.

FM:        I was very lucky with the timing because I got hired soon after I completed the Graduate Certificate program. But I worked hard to get to that point. I was also fortunate to be given good opportunities as a junior artist. Everyone struggles in their first year, but I had the benefit of a very supportive management team at RSP. They are comfortable with giving juniors challenging shots so that they keep on learning.

RSP:       Do you believe that visual effects offers a strong career path?

FM:        Definitely. It’s a growing field. One of my biggest surprises, when I began working, was to learn how much visual effects are used in films. In big films, virtually every shot is touched by VFX in some way, whether it involves beauty work on the actors or painting tiny details into the background. I expect filmmakers will continue to make greater use of visual effects. They need VFX if they want each shot to be picture perfect.

RSP:       What advice would you have for, say, a young woman from Adelaide who is considering a career in visual effects?

FM:        Work hard. That’s a given. If you work hard from the outset, it will make the transition to professional employment easier. You should also trust your creative instincts. Juniors shouldn’t hide. If you have an idea for a shot, have a go at it. Companies value that and they will come to trust you with more creative tasks as time goes on. Ultimately, we’re artists.

Our studio enjoys the advantage of being located in Adelaide, South Australia, one of the world’s most liveable cities. That, combined with our sterling reputation, and access to one of the largest and reliable rebates, makes RSP a magnet for filmmakers worldwide. This has propelled us to continued success and enabled RSP to contribute to a range of projects including Ford v Ferrari, Spider-Man: Far From Home, Captain Marvel, Dumbo, Alita: Battle Angel, The Predator, Tomb Raider, Peter Rabbit, Animal World, Thor: Ragnarok, Logan, Pan, the X-Men franchise and Game of Thrones.