HOLLYWOOD— Periscope Post has completed construction of a Dolby Atmos-capable theatrical mix stage at its recently opened facility in Hollywood. The stage features a dual-operator Avid S6 mixing console and is designed to produce Atmos mixes for theatrical, streaming and broadcast release. The first project to mix on the stage is a new television series for a streaming service set to premiere this fall. Rick Ash and Ron Eng are the re-recording mixers.

“We’ve built a mix stage that is future-proof and will meet the needs of theatrical, streaming and broadcast clients for years to come,” says Periscope Post & Audio general manager Ben Benedetti. “Atmos is fast becoming the standard for television and cinema. We have the capability to deliver Atmos for all mediums, while also supporting past standards. This stage represents the ultimate in flexibility.” 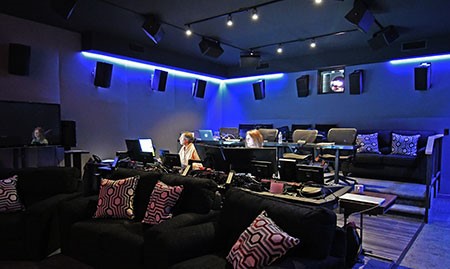 “The client response to the stage has been exceptional,” adds executive sales manager Rich Ellis.” Everyone I’ve brought in to see and hear it has been blown away by its rocking sound and beautiful appearance. The entire team has done a great job.”

Design and construction of the stage was handled by the veteran design team at Audio Intervisual Design (AID). Along with the S6 console, the stage features Avid Pro Tools|Ultimate workstations with MTRX interfaces utilizing Dante, MADI, AES and analog audio. “The room is built to meet or exceed what the Hollywood community expects in a high end dub stage” notes AID principal Jim Pace. “It’s a very tight sound with a lot of headroom. It is not going to be challenged by even the most taxing mixes.”

Construction was completed in less than five weeks. “Audio Intervisual Design stepped up to the plate,” says Benedetti. “Their team put in the extra time and effort to meet our deadline. The room sounds terrific. It’s got a wonderful warm sound and plenty of power.”

AID also supported the completion of an ADR stage, capable of hosting individuals and small groups, and a layback/QC room. Construction is ongoing on three additional mix stages for streaming and home theatre projects. Slated for completion this fall, they will also be Dolby Atmos capable and feature S6 consoles and Pro Tools|Ultimate.

Work on the theatrical stage was completed just in time to begin mixing the new, 10-episode series, which has a strong musical component. “The dynamics of this show are tremendous, from quiet inner monologues to elaborate musical productions and the room has performed for all of it amazingly well,” says Ash, a three-time Emmy Award-winner. “The bottom end of the room is extremely tight and responsive. It rocks!”

Ergonomically and acoustically the stage is designed to work equally well for theatrical and streaming projects, Ash adds. It is also laid out to promote collaboration. “The back of the room is close to the mix consoles,” he explains. “Clients are able to easily talk and interact with the mixers. It was very important to us that our clients feel integrated into the mix process.”

“It’s a great room,” agrees Eng. “We’ve completed four episodes and our clients are very happy with the results. We’ve held playback sessions for the showrunner and the cast, and they have really enjoyed it. It’s been fun.”

The show’s supervising sound editor, Emmy Award-winner Tom de Gorter of Atomic Sound is equally impressed. “I was excited to be the first show mixed on the stage,” he says. “It sounds great and has been running flawlessly. It’s obviously well built.”

The completion of the theatrical mix stage is the latest step in Periscope’s plan to provide comprehensive picture and sound post-production services in Hollywood. “We’re tailoring this facility to A-level cinema and streaming clients who value quality,” says Benedetti. “We want to support their stories and visions. We’re building an environment that is unique, beautiful and encourages creative expression.”

Audio Intervisual Design (AID) provides tools for the creative community with unparalleled product expertise and technical support. The company represents over 200 audio/video technology brands and specializes in both product sales and complete system integration with first class design, sales and technical support. AID specializes in media facilities and technology for music and audio postproduction and has successfully completed hundreds of integration projects. Jim Pace was one of the founders in 1984 and now owns and manages the company. Originally based out of the Record Plant Studios, the head office is currently located in Culver City/LA.