Two-night event for film and documentary producers scheduled for October 22 and 29.

NEW YORK CITY—  Goldcrest Post and CinePointe Advisors will unravel the process of preparing films for distribution in a special 2-night workshop titled Demystifying Film Delivery: What Every Producer Should Know. Scheduled for October 22 and 29 at Goldcrest Post in New York, the workshop is aimed at feature film and documentary producers and others responsible for budgeting and supervising films as they make their way through post production. 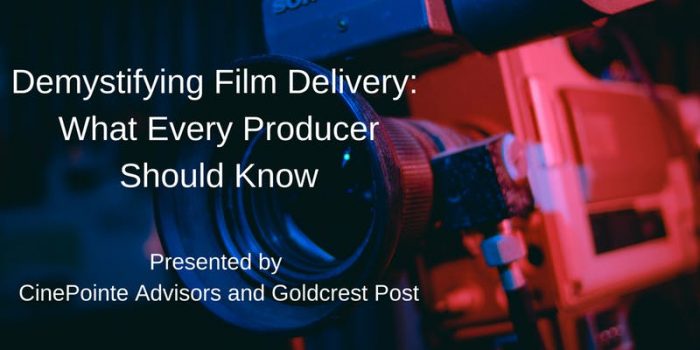 What exactly does it mean to “deliver” a film? Delivery is the crucial, final step needed to ready a film for distribution and get paid. And yet it is often an afterthought in production budgets and workflows. Stacey Smith of CinePointe Advisors will review delivery terminology, break down an actual delivery schedule, explain how to negotiate the terms of delivery to distributors to save time and money, and provide guidance in avoiding common pitfalls in legal and document delivery.

The role of the producer is becoming increasingly complex due to the near constant introduction of new camera workflows and complex OTT delivery specs. Spend an evening with professionals from Goldcrest Post who will draw back the curtain on the “magic” of sound and picture post-production. They will demystify the process through hands-on demonstrations and offer tips on how to deliver your project on time and on budget.

Tickets for the 2-night event are $175.00. Seating is limited. (Producers are strongly advised to attend both sessions, but a limited number of seats may be available each night for $99 each.) New York Woman in Film & Television members receive a 10% discount.

As an experienced producer and production company executive, Stacey Smith brings a unique perspective to her business affairs consulting work. Stacey began her longtime association with internationally renowned and fiercely independent filmmaker Jim Jarmusch in 1997, and for the next 16 years she oversaw the financing, production, delivery and distribution of films including COFFEE AND CIGARETTES, THE LIMITS OF CONTROL and BROKEN FLOWERS (winner of the Cannes Film Festival Grand Prix du Jury). At CinePointe Advisors, she works with producers to provide smooth, timely and cost-effective delivery, as well as helping producers and investors manage and maximize revenues from projects throughout the distribution cycle.

Prior to joining Goldcrest, McGowan produced more than 25 films as an independent producer and for Mark Cuban’s HDNet Films, Open City Films and Blow Up Pictures. In 2014, she received two Emmy Award nominations for her work on the HBO documentary, WHICH WAY IS THE FRONT LINE FROM HERE? THE LIFE AND TIMES OF TIM ETHERINGTON.

Rom previously served as president and general manager of Deluxe TV Post Production Services, following a tenure as managing director of Deluxe, New York. He served as senior vice president at Technicolor Creative Services for three years, and was an executive at PostWorks for 11 years. Rom began his career as a colorist at Unitel Video. He later joined Duart Film Labs, where he eventually became executive vice president of its digital and film labs. 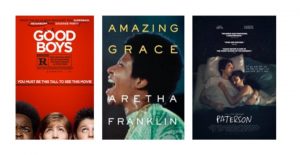 CinePointe Advisors was founded on the belief that the art of filmmaking must be supported by a sound business strategy in order to succeed in today’s competitive and ever-changing market. Our team works with financiers and producers to provide the business guidance, tools and support needed so that creative visions can become deliverable products.

CinePointe offers end-to-end services that support a project through its complete life cycle, providing a streamlined business structure while nurturing the creative process. Whether we are working with a producer, production entity, financier or entertainment fund, CinePointe offers tailored services that match each client’s needs and budget requirements. 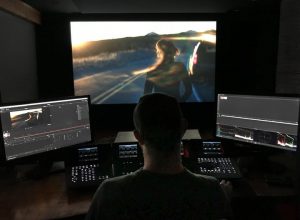