Adelaide, South Australia— World-leading visual effects company, Rising Sun Pictures (RSP) won the Creative Industries award at the 57th Australian 2019 Export Awards.  The Awards recognise Australian companies that are excelling in the international marketplace by selling and promoting their products and services. The award was announced at a gala awards ceremony at Parliament House in Canberra on the 3 December.

The South Australian studio was recognised for its work as a leading exporter of visual effects to the worldwide filmmaking community. RSP has contributed to over 150 films since its inception, with seven of those in the past year, including Hollywood blockbusters Captain Marvel and Spider-Man: Far From Home. 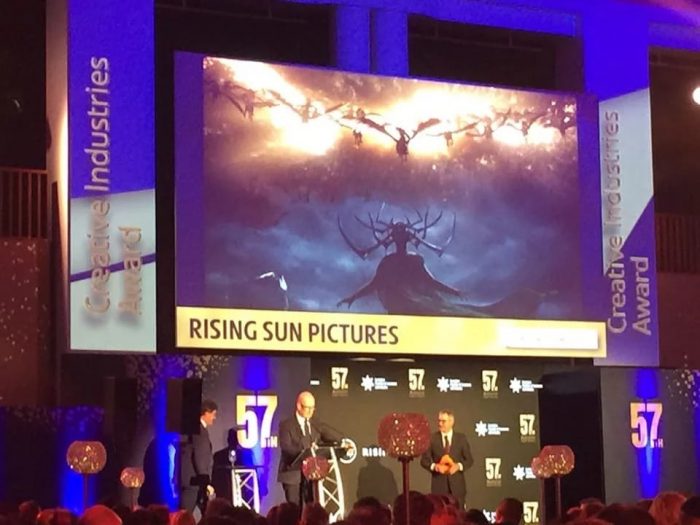 Using the latest in digital content creation tools, RSP creates photorealistic imagery for feature film and series. Its work involves the integration of live-action footage and computer-generated imagery to create environments and creatures that look realistic, but would be too dangerous, expensive or impossible to capture live. The results give filmmakers the ability to realise their vision, where the only limit to what they can create is their imagination.  RSP exports to the United States, Canada, China and the UK. Its clients include Disney, Marvel, 20th Century Fox, Warner Bros., and Sony Pictures Entertainment.

In its 24th year, RSP continues to improve: “We’ve come a long way since we started and are humbled to receive this award,” says Co-Founder and Managing Director Tony Clark. “Both the state and federal governments recognise the value in supporting creative exports through homegrown talent such as the team at Rising Sun Pictures. We compete on a world stage and are in demand by major studios, helping to strategically position Australia as a top destination for global visual effects production.”

“I am extremely proud of all of our team,” Clark adds. “They are a passionate, dedicated group who work together to make the world’s most memorable visual effects moments right here in South Australia”.

Our studio enjoys the advantage of being located in Adelaide, South Australia, one of the world’s most liveable cities. That, combined with our sterling reputation, and access to one of the largest and reliable rebates, makes RSP a magnet for film-makers world wide. This has propelled us to continued success and enabled RSP to contribute to a range of projects including Spider-Man: far From Home, X-Men: Dark Phoenix, Captain Marvel, Dumbo, Predator, Tomb Raider, Peter Rabbit, Animal World, Thor: Ragnarok, Logan, Pan, the X-Men franchise and Game of Thrones.