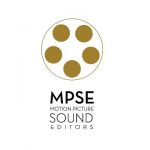 Tickets and sponsorships to the 67th MPSE Golden Reel Awards may be purchased here.