Adelaide studio is preparing to welcome its largest class to date of student artists.

Adelaide, South Australia—Next month, nearly three dozen aspiring visual effects (VFX) artists will arrive to study full-time at Rising Sun Pictures (RSP) in Adelaide, South Australia and take part in the studio’s highly-regarded training programs. Some will be students from the University of South Australia (UniSA) who will be undertaking the third year VFX specialization towards their Media Arts degrees. Others will be enrolled in a Graduate Certificate program, also run by RSP in alignment with UniSA, an intensive, 12-week course offering advanced training in compositing and tracking, and dynamic effects and lighting. It is designed to prepare students to move directly into professional roles as junior VFX artists.  Joining them will be almost 50 additional Media Arts degree students undertaking an elective unit in Modelling and Texturing as part of their second year studies at UniSA. 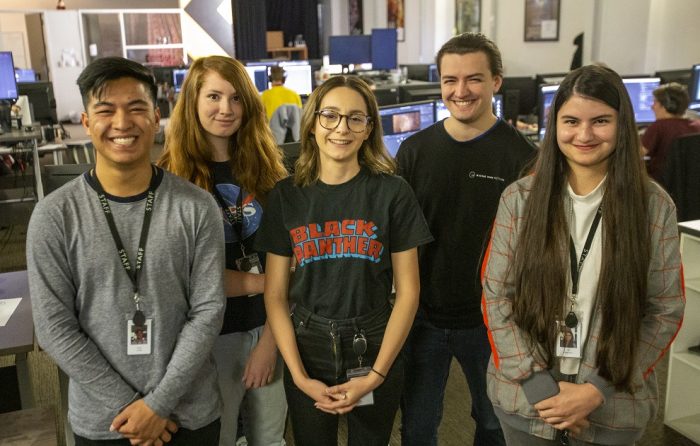 The new students will comprise RSP’s largest class to date. The studio, which has produced visual effects for such hit films as Ford v Ferrari, Captain Marvel and Spider-Man: Far from Home, has seen its educational division grow steadily over the past several years, and you don’t have to look far to understand why. Global entertainment production is booming. World cinema box office is expected to top US$50 billion this year. With streaming services expanding at a dizzying rate, television production is advancing faster still. As all those productions require ever more high-quality visual effects, demand for qualified artists is at an all-time high. That translates into lots of well-paid, creatively-challenging and personally-rewarding jobs, many located in Australia.

“It’s exciting,” says RSP Manager of Training and Education Anna Hodge. “To keep pace with our record enrollment, we’ve been scaling up resources and preparing for the arrival of our new students. We are committed to maintain the standards we’ve established. We want to ensure our students have the best possible experience and are on a pathway toward fulfilling their career aspirations.”

Students entering the program find themselves in an environment quite different from what they may have experienced at traditional universities and vocational schools. RSP runs its education program like a working studio and its instructors are professionals from its studio operation. Graduate Certificate and VFX specialisation classes run nine to five and are project-based. Students learn to master the industry’s latest software tools while working with elements from actual Hollywood blockbusters. Students are exposed to the full variety of visual effects jobs through “Day in the Life of…” presentations. They also receive guidance from the studio’s recruitment department on how to compile resumes and showreels and develop networking and interviewing skills.

“Our students get the best from the best,” says Hodge. “Our instructors are up to date with the latest technologies and techniques because they rely on them in their other roles as senior artists. They pass along an incredible amount of first-hand insights and experiences and that’s why our students are so employable.”

Indeed, RSP has compiled an enviable record for connecting students with employment opportunities. According to Hodge, more than 70 percent of students earning Graduate Certificates find full-time employment within six months. “Last November, three of our graduates were hired right here at RSP,” she notes. “Two others were hired by another studio in Adelaide. We’ve developed a strong reputation among VFX companies in South Australia, interstate and overseas, and their recruiters often contact us when they have openings for junior artists. We’ve received lots of feedback from studios who’ve hired our students about the high caliber of our graduates.”

The quality of RSP’s program also derives from its close relationship with UniSA. Hodge confers regularly with Dr. Josh McCarthy, program director of the university’s Film and Television Department, to ensure that the program complies with its policies and procedures.  As Rising Sun Pictures is accredited through UniSA, all qualifications meet the strict requirements of the Australian Qualifications Framework for educational institutions. The curriculum taught at the studio is under constant review to ensure it is providing students with the skills they need to thrive in common industry roles. “The university is very flexible in terms of how we design the curriculum,” says Hodge. “That has allowed to really go for it. We’re very proud of our relationship with UniSA and they’ve been very supportive of our initiatives. We’re on the same page in that we’re both thoroughly committed to the success of our students.”

Originally designed to train young artists to fulfill its internal needs, RSP’s Education program has developed into a critical training center for the visual effects industry across Australia and beyond. “Our program has enjoyed great support from the founders of RSP as it has grown and evolved,” says Hodge. “We all enjoy watching our students achieve their dreams and get started on productive careers. Several, in fact, have moved into higher level roles at this company. A few have even come back to us as instructors. That’s a fantastic outcome.”

The Adelaide studio is home to more than 150 exceptionally talented artists who work collaboratively to deliver incredible imagery. Focused on producing only the highest quality and innovative solutions, RSP designed an extremely flexible, custom pipeline, which allows the company to scale up quickly and adjust its workflow, to meet audience’s demand for evermore spectacular visuals.