Station breaks its new image campaign, with a high-energy, original song, during the Academy Awards show.

DALLAS— Las Vegas television station KTNV leveraged this year’s Academy Awards broadcast to launch a spirited promotional campaign for its popular a.m. talk show Good Morning Las Vegas. Set to an upbeat, original anthem produced by Stephen Arnold Music, the campaign pays tribute to the community of Las Vegas and the morning show’s role in helping people get their day off to a rousing start. 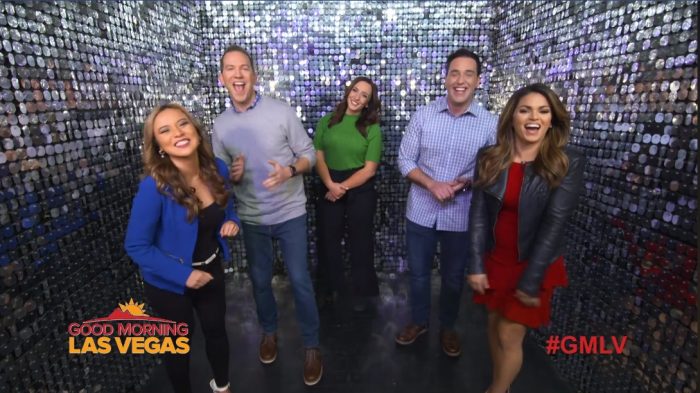 The 60- and 30-second promos that aired locally during the Oscars mix landscape and lifestyle imagery with lighthearted vignettes involving the show’s on-air talent. Shooting locations ranged from suburban neighborhoods to scenic Red Rock State Park to an immersive pop-up art exhibition on the Las Vegas Strip. The infectious, pop-flavored theme song features the tagline, “It’s getting contagious…Good Morning Las Vegas!” KTNV plans to roll out additional versions of the spot in coming weeks. An extended version, featuring the full song, will be shared through social portals.

Conceived by KTNV Promotions Manager Jenny Dolph and Director of Marketing and Creative Services Larry Watzman, the campaign highlights the distinctive personality of the city and Good Morning Las Vegas. “We wanted to do something that made people feel good,” says Watzman. “We had the luxury to be creative with the visuals and the music and deliver something fun…because this is Las Vegas.”

The campaign also serves as a showcase for the show’s on-air personalities. “We want to get the word out about our talent, some of whom are relatively new to the show,” explains Dolph. “They bring energy and excitement to Good Morning Las Vegas.”

Dolph and Watzman collaborated with Stephen Arnold Music’s creative team to develop a concept for a theme song that would appeal to the show’s diverse audience. “Early on, we came up with the idea of using the show’s name as the hook,” recalls Stephen Arnold Music VP/Creative Director Chad Cook. “The name has a natural flow and cadence that works well when sung. It also fit the theme of ‘a great way to start your day.’ It sticks in your head and brands the show.”

Stephen Arnold Music also made the song memorable through the song’s unusual instrumentation and percussive beat. “It’s super catchy, but not like a typical pop song,” Cook says. “We used handclaps, acoustic guitars and whistles to make it energetic, relatable and fun.”

If the song’s effect on the station’s staff is any indication, the new campaign is going to make a big impression on viewers. “All of our employees have been singing the song,” says Watzman. “They are sharing it with family members. They love it! We think we’ve got a pretty cool thing on our hands.”

About Stephen Arnold Music:
Often referred to as the most-heard, least-known composers in the world, Stephen Arnold Music’s creativity is experienced every day in more than 500 million homes worldwide.  Based in Dallas, Texas, with additional studios in Santa Fe, New Mexico, The World Leader In Sonic Branding® has more than 25 years of success delivering impactful, brand-defining music that makes a difference for today’s top broadcast networks, cable channels, television stations, digital media outlets, production companies, corporations and advertising agencies.  With multiple Emmys, Addys and Promax Golds to their credit, Stephen Arnold Music’s specialized approach and commitment to the power of sonic branding, state-of-the-art production and unparalleled customer service is at the core of its promise. Stephen Arnold Music continues to set the creative bar in a highly competitive content landscape. For more information, please visit http://www.stephenarnoldmusic.com

KTNV-TV is the ABC affiliate in Las Vegas, Nevada owned and operated by The E.W. Scripps Company. The station is committed to making Las Vegas a better place for all families and communities here in Southern Nevada. 13 Action News strives to solve problems for locals, problems that government and big business often ignore. The KTNV team is trhe station that asks the tough questions and holds those in power accountable.

The E.W. Scripps Company (NASDAQ: SSP) advances understanding of the world through journalism. As the nation’s fourth-largest independent TV station owner, Scripps operates 60 television stations in 42 markets. Scripps empowers the next generation of news consumers with its multiplatform news network Newsy and reaches growing audiences through broadcast networks including Bounce and Court TV. Shaping the future of storytelling through digital audio, Scripps owns top podcast company Stitcher and Triton, the global leader in technology and measurement services. Scripps runs an award-winning investigative reporting newsroom in Washington, D.C., and is the longtime steward of the Scripps National Spelling Bee. Founded in 1878, Scripps has held for decades to the motto, “Give light and the people will find their own way.”