Adelaide, South Australia—Historically, the visual effects (VFX) industry has a male-dominated workforce. Gender disparity runs across the board, but is especially evident in artist and supervisory roles, where women occupy a small fraction of positions, and have for decades. But, at long last, that is slowly changing. Even as female-led blockbusters like Captain Marvel, Wonder Woman and Rogue One: A Star Wars Movie have taken the box office by storm, women have begun to turn up with greater frequency on VFX studio credits.

Rising Sun Pictures (RSP) has been especially successful in this regard. As a company with women in several prominent Executive roles, the Adelaide studio has been making a concerted effort to encourage more females to peruse a career in VFX, at all levels, with an ultimate goal of achieving gender parity. Similarly, its highly-regarded Education department has been collaborating with its program-partner the University of South Australia (UniSA) and other local schools to recruit talented young women who want to study VFX.

One such success story is Adelaide local Rebecca Wells. An aspiring artist, Wells was motivated to study VFX because of her love of films. When studying at UniSA, in a couple of her classes, she was one of few women in the course, “I wish there had been more women in the class, but it didn’t discourage me”, she says. 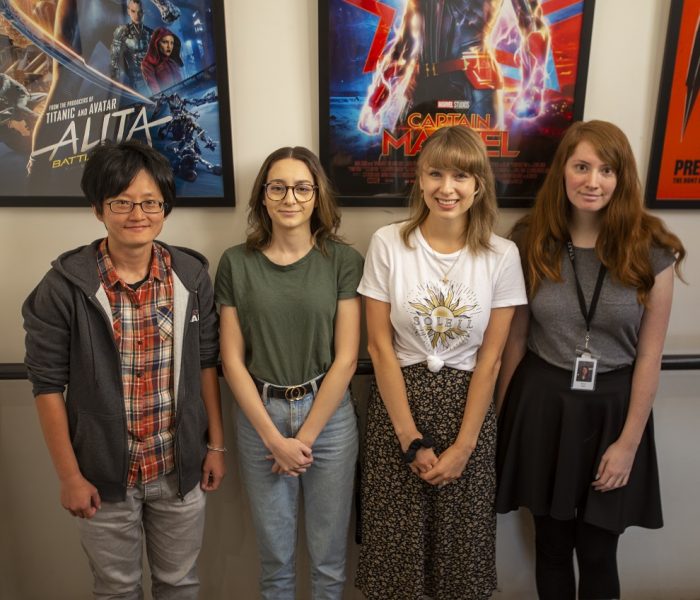 Completing the Graduate Certificate program in 2017, Wells has gone on to work at several Australian studios including Luma Pictures, KOJO and Resin. At RSP, the Paint/Roto artist has contributed to several film and series projects, including Peter Rabbit, Tomb Raider and Animal World.

Wells notes that she was encouraged early on to stick with it by one of her instructors at RSP. “Jeremy Kelly-Bakker was probably the most supportive mentor I’ve had,” she recalls. “He was not only a superb instructor, he helped me get my first job in the industry. He recommended several of us to a local studio and I went to work straight after the RSP course.”

Like Wells, Junior Paint & Roto Artist Samantha Maiolo was introduced to RSP’s Education program via UniSA. She took courses in both Dynamic Effects & Lighting, and Compositing & Tracking while working toward her Bachelor of Media Arts degree. Upon graduating from UniSA she was offered a position at RSP to work on an upcoming Hollywood blockbuster.

A direct beneficiary of the studio’s effort to attract talented young women, Maiolo did not share the experience of some of her older colleagues of entering a domain dominated by men. She notes that there were quite a few women in her class. “I was happy to see how many women were enrolled in the program with me,” she says. “In the department where I work now, there are also quite a few women, including in senior roles. My lead is female. It’s inspiring to see someone like yourself in those positions.”

Maiolo adds that she expects the presence of more women in the field will make it easier for others who are just starting out. “You just need to be confident and know your self-worth. You need to set goals and persist.”

Women who joined the profession in earlier years were more likely to find themselves in male-dominated environments. Having few role models, they had to rely on their own determination to succeed. Senior Compositor Michaela Danby is familiar with the issue having worked in the VFX industry for more than 10 years. Now in her third stint at RSP, alongside stops at Double Negative, Animal Logic, Luma Pictures and ILM, she has accumulated credits on more than 30 films, including Ready Player One, Alien: Covenant and Harry Potter and the Deathly Hallows: Parts I & II.

Danby observes, “I have been in the industry for a while now and it has been very male dominant. It hasn’t been without its challenges, but I am starting to see a change. I’m noticing more females coming through the ranks, which is exciting”.

Female artist Ting Yun “Lu Lu” has faced different challenges. LuLu, an FX artist whose credits at RSP include Captain Marvel, Tomb Raider, Thor: Ragnarok and Game of Thrones, was born in Taiwan. After studying computer science and animation at local universities, she spent four years working for a Taiwanese VFX studio. She then decided to indulge her sense of wanderlust and test the waters outside her native country, ultimately landing a job at Animal Logic in Sydney.

Although she had experience working on Hollywood-caliber productions (including Warner Bros.’ Legend of the Guardians: The Owls of Ga’Hoole), she found adjusting to a new culture initially daunting. “It was a whole new adventure,” she recalls. “I found myself working with people who spoke a different language and came from a different cultural background. I was very nervous and had a stomach ache my first day on the job. But after a while, I realised it’s not that different, especially in Australia which has a mixed culture. People respect other people’s backgrounds and are very welcoming.”

Spurred on by her success, LuLu went onto jobs at studios in New Zealand and the UK. She also spent six months at a visual effects studio in Japan where she was obliged to communicate with coworkers via an interpreter. “It was a good experience and it gave me the chance to live in Tokyo and explore,” she observes. “My friends tell me that I am lucky because I’ve had the opportunity to live all over the world and do work that I enjoy. I have been at RSP for several years now and I love it.”

Women who persevere in visual effects are driven to overcome whatever hurdles appear in their paths by their love for the work. Danby, who grew up watching science fiction movies with her father, says it’s exciting to contribute to the types of films she enjoys seeing on the big screen. Plus, the work itself is always interesting. “Every shot is unique and presents a new set of problems,” she says. “I’m learning every day from my Supervisors and our Production clients.”

Christina Rzewucki, who joined RSP as a Texture and Look Development Artist in 2017, says that visual effects offers female artists opportunities to work on diverse projects and continuously develop new skills. Having spent her first three years at the studio working on feature films including Thor: Ragnarok, she is currently creating visual effects for a series where she is challenged to deliver high caliber work at a much faster rate. “It’s different from feature film, but it’s still fun,” she says. “I’m working with a small team of 10 to 15 artists, both female and male. We’re tight-knit and communicate very well. I really enjoy it.”

In addition to her work as an artist, Christina teaches a course in Texture and Look Development through the studio’s Education department. That has led her to experience firsthand the industry’s changing demographics. “A lot more women are coming into the industry as young artists,” she says. “Quite a few women have taken my course. It might not have reached the senior levels yet, but more and more junior positions are being filled by women and we need to ensure this continues.”

Being relatively new to the industry herself, Christina says she hasn’t experienced the gender gap in the same way as other female artists. “I think it’s good to have men and women represented equally in the industry,” she notes, “but, personally, I haven’t felt the disparity. I’ve always felt equal. Sometimes people will ask me what it’s like being one of few women in the building, and my response is, ‘I haven’t noticed.’ I get along with the guys very well.”

While VFX has always been a predominately male industry, RSP Education has made it one of its key objectives to increase the number of females enrolled in its accredited training courses. “We are tackling this by starting at school level,” says Anna Hodge, Head of Education and Training. “By visiting schools, including all girl schools, we’re encouraging young females to want to pursue a career as a VFX artist. We’re starting to see a change.  Female enrolments have increased, but not to the extent I would like. Our aim is to make this grow even more. We want to see gender parity in enrolments by 2021.”

For over two decades Rising Sun Pictures (RSP) has been responsible for crafting some of the world’s most memorable visual effects moments. The Adelaide studio is home to more than 150 exceptionally talented artists who work collaboratively to deliver incredible imagery. Focused on producing only the highest quality and innovative solutions, RSP designed an extremely flexible, custom pipeline, which allows the company to scale up quickly and adjust its workflow, to meet audience’s demand for evermore spectacular visuals.