Having worked on a string of studio blockbusters, recent graduates Abby Nath and Rebecca Wells return to RSP in veteran roles.

Adelaide, South Australia— Rising Sun Pictures Education has earned a stellar reputation among aspiring visual effects artists both because it offers a unique opportunity to train in a working studio environment, and for the success its graduates enjoy in launching their careers. Many young artists who have completed its rigorous Graduate Certificate programs, operated in partnership with the University of South Australia (UniSA), have been hired by RSP itself, where they’ve had a chance to work on Ford v Ferrari, Spider-Man: Far From Home, Captain Marvel and other hit films. Others have found employment at studios elsewhere in Australia and internationally. 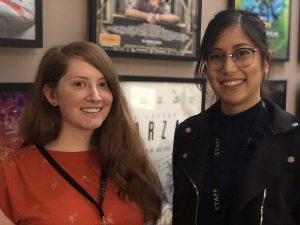 RSP provides its students with the visual effects training they need to get a foot in the door and prepares them to thrive in their first VFX role. Having honed their skills in a professional environment, under the tutelage of highly-experienced, working professionals, most find the transition to real-world employment seamless. Similarly, having benefitted from the school’s diverse career guidance resources, graduates understand what’s expected of them as working professionals, how to develop industry contacts and how to market themselves to prospective employers.

“Teaching practical, professional skills is central to our program,” says the studio’s Manager of Education and Training Anna Hodge. “We provide crucial building blocks to long-term success and career advancement. We are thrilled when our graduates land their first jobs in industry, but our interest doesn’t end there. We want them to continue to succeed, move up the ranks and achieve their career goals.”

Abby Nath and Rebecca Wells are prime RSP success stories. Both young women earned Graduate Certificates at the studio and were subsequently hired as junior artists. After garnering additional experience at other studios, both are now back at RSP and engaged in exciting new projects in more advanced roles.

Originally from Singapore, Nath was awarded her Graduate Certificate in Dynamic Effects and Lighting in 2017, having participated in the program through a Rookies scholarship. She began working at RSP immediately thereafter. She continued her career at KOJO and Mill Film, both in Adelaide, before returning to RSP in May as a mid-level Look Development Artist. Along the way, she’s worked on films including The Predator, Alita: Battle Angel, Captain Marvel, X-Men: Dark Phoenix and Ford v Ferrari.

As part of RSP’s team on Ford v Ferrari, Nath helped build a replica of Daytona International Speedway, as it appeared in 1966, that was featured in an 8-minute sequence in the film. “We built the grandstand, the crowd and part of the track,” she recalls. “It was a lot of fun figuring out what the people should be wearing. Plus, it was such a great story with wonderful actors. I loved it!”

Nath was surprised to find herself performing meaningful work on high-profile studio features so soon after completing her education, but says that her training at RSP kept her from feeling overwhelmed. “Going through a program that’s set up like a real studio helped me a lot,” she says. “At RSP, I had an opportunity to meet and talk with industry professionals and imagine myself in a similar role.”

Currently a Paint and Roto Artist, Wells completed the Graduate Certificate in Compositing and Tracking program in 2017. In addition to RSP, she’s worked at Luma Pictures, KOJO and Resin, earning credits on films including Peter Rabbit, Tomb Raider, Animal World, Spider-Man: Far From Home, Captain Marvel and Jojo Rabbit. “I’ve found it valuable to move around and work at different studios,” she says. “At smaller studios, you have a chance to generalise your skill set and do things you might not get a chance to do at a larger company.”

Wells credits her experience at RSP for giving her the confidence to persist in an ultra-competitive industry. “I’m normally quite shy and reserved, but I learned what it takes, and I’m driven to go new places and work with different people,” she says. “I expected my first years to be slow and involve smaller projects, so I was surprised to be working on big projects right away. As a Marvel fan, it was especially exciting to work on Spider-Man and Marvel films.”

“It’s lovely to go to the theater with family and friends and see a shot I’ve worked on up on the screen,” she adds. “I’ll nudge them and say, ‘I did that!’”

While acknowledging that the life of a visual effects artist entail plenty of hard work, both women insist that opportunity abounds. “Knowing how hard it is to get into the industry, you need to believe in yourself,” Wells says. “Keep learning, keep pushing yourself and you will succeed.”

“If you are eager to improve, you’ll make a good impression and that will help you move forward,” adds Nath. “It can be difficult, but there are always new shows coming in and people are needed to produce the visual effects. Why shouldn’t it be you?”

For over two decades Rising Sun Pictures (RSP) has been responsible for crafting some of the world’s most memorable visual effects moments. The studio is home to more than 150 exceptionally talented artists who work collaboratively to deliver incredible imagery. Focused on producing only the highest quality and innovative solutions, RSP designed an extremely flexible, custom pipeline, which allows the company to scale up quickly and adjust its workflow, to meet audience’s demand for evermore spectacular visuals.