RSP Education, UniSA and We Made a Thing Studios Partner in New Student Filmmaking Project

Bachelor of Film and Television and Graduate Certificate students from the University of South Australia and Rising Sun Pictures, working under professional guidance, will produce a short film to premiere at the Adelaide Film Festival in October.

Adelaide, South Australia— Rising Sun Pictures (RSP) is teaming with University of South Australia (UniSA) and We Made a Thing Studios to provide film and television students with practical, hands-on experience in entertainment media production—and an opportunity to see their work on the big screen at next month’s Adelaide Film Festival.

Third-year undergraduate Film and Television students from UniSA’s newly-formed Film Concept Lab (FCL) will take part in the production of an original short film under the supervision of We Made a Thing Studios’ principals Jeremy Kelly-Bakker and Tom Phillips. UniSA students enrolled in the Graduate Certificate and Undergraduate VFX Placement in Compositing and Tracking training program that RSP operates in partnership with UniSA will produce visual effects for the film.  The entire production is slated to be complete in little over a month, with the film scheduled to premiere in a special screening at the Adelaide Film Festival (AFF).

“It’s a fantastic opportunity to gain industry experience and exposure,” says UniSA Film and Television Program Director Josh McCarthy. “Students involved in the film shoot will work alongside professionals in all departments and learn what it takes to pull together a professional production in a short period of time. Our VFX students at RSP will work in a simulated production environment, meet tight deadlines and produce individual and team VFX sequences for the film, which they can also use in their personal demo reels.” FCL students will be awarded a professional film credit. All students taking part in the project will attend the premiere at AFF.

RSP has run its training program for aspiring visual effects students in partnership with UniSA for more than five years. Dozens of students who have taken part in the program have gone onto employment at RSP and other visual effects studios across Australia and internationally. In 2018, as part of their training, RSP students worked with We Made a Thing Studios on the short film Lucy and DiC. It also debuted at AFF and was subsequently developed into a web series that has garnered more than 4 million views online.

“We are effectively integrating real-world, industry projects into the curriculum,” explains RSP Manager, Training and Education Anna Hodge.  “Students work with real clients, meet strict deadlines and perform under pressure—while still having some fun! Lucy and DiC launched several of our graduates into professional careers. They also got to see their work on display at the South Australian Screen Awards where the original film picked up four awards.”

Part of the philosophy behind FCL is to enable other creatives to work on a high concept short that otherwise might seem out of the realms of possibility to produce. With the end goal to generate exciting new IP and creative teams that can then be taken to market, much like Lucy and DiC. 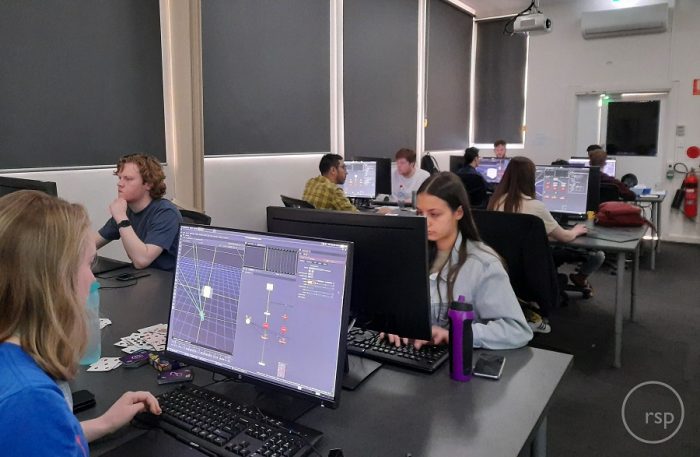 The project, The Normals, will be directed by Leela Varghese (award-winning director/writer of 2019’s Tropfest film Crush) and co-written by Tom Phillips and Maria Lewis (best-selling author of The Witch Who Courted Death and Who is Afraid?).  It’s set in a violent and corrupt world where assassins are celebrities, but not all hit people are equal.

Some twenty UniSA students will be attached to the production into specific departments where they can shadow and work alongside industry professionals and see firsthand the workings of an industry production.  A separate group of UniSA graduates will produce a behind-the-scenes film documenting the process.

Kelly-Bakker sees potential for the project to develop into a regular part of UniSA’s and RSP’s programs. “We derived huge enjoyment from working with students on Lucy and DiC and take pride in the fact that it resulted in several of them landing their first jobs,” he says. “They had a chance to work with professional writers, directors and crew and make connections that otherwise might take years.”

McCarthy sees the project as contributing to UniSA’s mandate for growing the talent pool for South Australia’s burgeoning media production industry. “We’re very excited about this project,” he says. “It’s a good time for the film and television industry in Australia generally, and especially Adelaide. The government has just announced a new stimulus package and it is attracting big productions. South Australia is a very appealing place to film.”

At RSP, visual effects students have been hard at work, honing their skills in anticipation of the new short. “Our students are very excited,” Hodge observes. “During orientation, we present short films from previous years so that our new students can see the professional-level of work that is achieved with our training. The current students are now busy with their course work, getting ready to tackle the technical and creative challenges ahead. It’s quite inspiring.”