Adelaide, South Australia— The training programs at Rising Sun Pictures (RSP), operated in partnership with the University of South Australia (UniSA) provide prospective visual effects artists with the essential skills they need to work in industry. The Bachelor of Media Arts and Graduate Certificate programs both have an admirable record for success with its graduates regularly finding employment at visual effects studios throughout Australia and beyond—including at RSP itself.

Sash Elliott, Maddison Green, Ryan Woodcock, Olivia Mitchell and Monica Quan are excellent examples of the value of training at RSP. Each of the six Adelaide natives participated in one of RSP’s training programs accredited through UniSA last year and were subsequently hired by the studio in junior roles.

Each of these young artists has a different story, but they share commonalities in their commitment to hard work, eagerness to become accomplished professionals and determination to achieve big things. 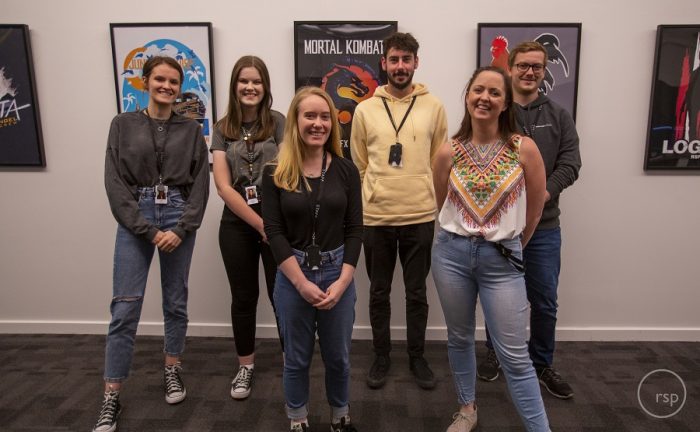 Here are their stories:

Sash Elliott completed the visual effects (VFX) specialisation of the Media Arts degree last October and was offered a position with the studio just a few weeks later. Initially hired as a front-line services wrangler, managing data and providing artist support, she moved to the layout department after two months and is currently a junior track and match-move artist. “I love layout,” she insists. “It was challenging at first, but as long as you know the under-pinning principles, you can apply it to the software.”

Sash’s passion for visual effects ignited when she enrolled in an introductory computer animation course as a Media Arts student at UniSA. “It blew me away,” she recalls. “I immediately saw it as a career opportunity. When I learned that I could specialise in visual effects and take third-year courses at Rising Sun Pictures, I signed up straight away.”

The training was demanding, but Sash applied herself diligently and undertook tasks beyond what her instructors required. “I did my assignments to the best of my ability, but I also pushed myself further and took on side projects to show my passion and interests,” she recalls. “At the end of the semester we gave presentations and I shared some of my extra work. It helped me stand out.”

Securing her first job so quickly, Sash looks forward to a promising future. “I’m focused on improving my skills in layout,” she says. “I hope to progress to senior artist, but that will take experience. I’m eager to see what happens.”

Maddison Green came onboard RSP as a frontline services wrangler in February. Having been cautioned, following her graduation last October, that it could take six months or longer for a position to open, she was pleasantly surprised. “The learning curve is steep,” she says of her new role, “but it’s going very well and so much fun. The camaraderie is great. Everyone here loves movies, so it’s easy to chat and have good conversations. Everyone’s keen to help each other out.”

Maddison trained onsite at RSP as a third-year Media Arts student at UniSA. She received intensive instruction in compositing, tracking and other skills, but what she found most rewarding was the opportunity to interact with working professionals. “Talking with senior artists and learning how they progressed in their careers was super valuable,” she recalls. “The teaching assistants, who also trained at RSP, reinforced the principles covered in class. They understood what we were going through and knew how to slow it down and explain things.”

Anxious to flex her creative muscles, Maddison is interested in becoming a compositor. However, her experience thus far has taught her that the most important quality for a young artist is adaptability. “You need to take advantage of every opportunity,” she insists. “If you have a chance to talk with senior artists, go talk with them. If you’re in class, you need to stay focused and engaged. You need to be a good artist, but you also need to network and cultivate connections.”

Ryan Woodcock set his sights on a visual effects career in high school. His interest was piqued by a showcase presentation from the Academy of Interactive Entertainment (AIE). He completed AIE’s two-year advanced diploma program, then went onto UniSA and undertook RSP’s Graduate Certificate program. “By year eleven, I knew I wanted to work in visual effects, but it was only when I got to study at RSP that I learnt how to get my foot in the door,” he says. “The program is amazing and offers a doorway to industry through its recruiters and connections to other studios.”

Ryan is totally absorbed in his work as a junior paint and roto artist in RSP’s layout department but he maintains a strong interest in compositing, which was a focus of his training. “Compositors apply the final touch before the image goes to the screen,” he observes. “They put it together and make it look gorgeous. They deliver the shots that people see. I find that so appealing.”

Hard work and persistence are obviously essential to success in visual effects but being lucky doesn’t hurt. Ryan says that he landed his job, in part, by being in the right place at the right time. “I phoned an RSP recruiter just to stay in contact and it happened that the studio’s head of 2D had just informed her of an opening,” he recalls. “She said she’d get back to me on Thursday, but the next day I received an email with a job offer. One week later, I was starting. There’s nothing like good timing.”

Olivia Mitchell enrolled in UniSA’s Media Arts program looking for a way to apply her background in fine arts. She considered options in design and videography but chose to focus on visual effects. “I like the idea of creating illusions,” she says. “Producing something artificial that looks real seemed fascinating to me. I wanted to hone that craft.” Still, she didn’t consider visual effects as a potential career until she met RSP recruiters at a UniSA open day event. “I thought, ‘Wow, I could do this. There’s a process and an industry based formal training program.’”

That program put her mettle to the test. UniSA Graduate Certificate and VFX specialisation students are full time at the studio, five days per week, and their workload sometimes requires extra late-night hours. “It was intensive,” Olivia confesses. “It involved a lot more than learning software. We learned teamwork.  Our class worked together on the visual effects for a short film. We had to check in with each other and coordinate our work. We learned to respond positively to feedback, communicate, and conduct ourselves as professionals.”

With the film industry boom and the need for visual effects growing at an even faster rate, Olivia is happy with her career choice. Currently a frontline services wrangler, she sees ample opportunities to advance and diversify her skill set without leaving South Australia. “But you have to put 110% into it,” she observes. “Hard work is essential to building skills and earning a good reputation. It’s important not to squander opportunities like this.”

Monica Quan has a background different from other recent RSP graduates. After earning her first degree from UniSA, she embarked on a career as a television cameraperson, editor and producer. A few years down the road, she got hungry for a change and enrolled in RSP’s Graduate Certificate program. “I really wanted to learn compositing,” she recalls. “I looked into online courses, which seemed okay, but then I found RSP and realised it could get me there much quicker.”

Monica had little background in visual effects software before the training program and had to work especially hard to get up to speed. “I was pushed out of my comfort zone,” she says. “I was new to the software, but I finished the course and am proud of what I achieved”.

“I had worked in production environments before, but never paid attention to the photo-realism and level of detail involved in high quality visual effects,” she adds. “I thrived on that and I loved learning about the physics of light and how that translates through the pipeline. It was just what I was looking for.”

Monica is grateful to her instructors for their patience and expertise in helping her successfully master new skills. “They were amazing. Each brought a different instructing technique. Some would sit down and work through a problem with you in a very congenial way. Others were forceful in insisting on the proper technique and execution.”

A few months after completing her training, Monica accepted a position in RSP’s HR department as people and culture coordinator. “I enjoy being in a space where I interact with everyone in the company,” she says. “I’m learning about the technology, artistic techniques and other aspects about the business.”

Monica, who is a mother of three, admits that changing careers was daunting, but she is glad that she persevered. “There’s a message on the screensaver of my phone that I referred to often while I was training,” she recalls. “It says, ‘Making a big life change is scary, but what’s even scarier is regret.’”

Like his former fellow students, now co-workers, John Bliss is an Adelaide native who trained at RSP while working toward a Media Arts degree at UniSA. He found the opportunity to learn in a studio environment extremely valuable both in terms of gaining technical skills and understanding how to be a professional.

At first, he also found the experience challenging, due to his self-imposed pressure to do well and earn the approval of his instructors, but he soon hit his stride. “About halfway through the course, I realised I was picking things up and starting to understand the bigger picture,” he recalls. “It all clicked, and I knew that I had what it takes to move into a position in this industry.”

After completing his degree, John began contacting visual effects companies across Australia, seeking employment as a junior artist. He scored an interview with a major studio but failed to immediately land a job. He felt concerned but did not doubt his ability. He continued to send out resumes and showreels until RSP contacted him earlier this month and offered him a position as a junior paint and roto artist. “The time I spent searching for a job made actually jumping into one all the more exciting,” he says. “It taught me to cherish the opportunity.”

John intends to make the most his good fortune by working hard to hone his skills. “To be successful in this industry, you have to adapt quickly to new circumstances, maintain a positive attitude and enjoy what you do,” he insists. “Even when my course work was a little overwhelming, I remained enthusiastic and energetic. You’ve got to keep improving if you want to move ahead.”

The studio enjoys the advantage of being located in Adelaide, one of the world’s most liveable cities. That combined with its sterling reputation, and access to one of the largest and reliable rebates, has made it a magnet for filmmakers worldwide. This has propelled RSP to continued success and enabled them to contribute to a range of projects including Black Widow, Ford V Ferrari, Spider-Man: Far from Home, X-Men: Dark Phoenix, Captain Marvel, Dumbo, The Predator, Tomb Raider, Peter Rabbit, Animal World, Thor: Ragnarok, Logan, Pan, the X-Men franchise and Game of Thrones.