CHICAGO— In a new spot for Land O’Frost’s Bistro Favorites and Chicago agency Merge, STORY director Ky Dickens shows that, when it comes to sandwiches, beauty is in the eye of the maker. The spot features a woman and a man preparing sandwiches in split screen, each applying special touches and ingredients to produce a personal masterpiece. The spot has fun with the split screen set up as the pair trade comments and the man knocks a tomato from his frame into hers.

The spot had to be tightly choreographed to allow the banter between to two actors to flow smoothly. It also required clever art direction to ensure the two kitchen sets aligned. “We wanted to inject a flirtatious feel between these two very different people making very different sandwiches,” explains Dickens. “So, we looked for moments where it made sense to break the wall between them. It took a good amount of prep work to marry their two worlds.” 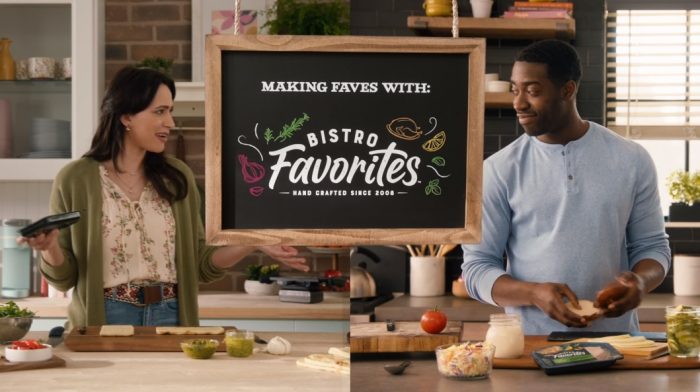 Dickens is best known for her award-winning documentary films and, in advertising, for directing lifestyle spots, but she cut her teeth as a tabletop director. She still loves food photography and relished the opportunity to make food look great in the context of a funny, true-to-life story. “Food and performance go together quite well,” she says. “In this case, I wanted both the performances and the food to feel authentic. Instead of having food stylists design the sandwiches to the nth degree, we taught the talent how to do it. We gave them general instructions and then told them, ‘You’re on your own.’ It was great fun and the results are more natural.”