Set during the pandemic lockdown, the fake movie stars a scruffy hero with a raspy drawl and perpetual sneer named Bobby Banh. He faces the challenge of battling an army of chicken nugget zombies from an alternate universe while simultaneously home-schooling his kids. As Boulder descends into chaos, Banh faces off against the “flavorless” invaders with a sub sandwich that doubles as a light saber. 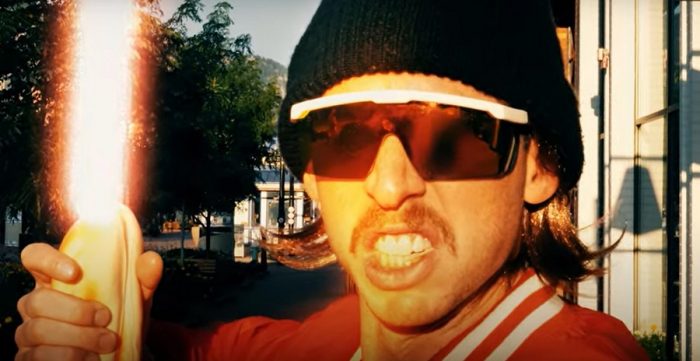 11 Dollar Bill Managing Partner Lisa Effress says that her team was attracted by the goofiness of the premise and opportunity to pull out all the stops in post. “The chance to work with Jim and add an extra level of creativity to his boards was fun and appealing,” she recalls. “We liked the sheer zaniness of it.”

The post team accentuated the 1980s vibe by dialing up a super-saturated look and applying over-the-top visual effects, graphics and sound design. “It starts out drab and smoky, reflecting the drudgery of covid life,” explains Creative Director Christian Robins, “but once we move to the parallel universe, we get into a poppy, vaporwave aesthetic that draws from anime and cyberpunk. We had carte blanche to create something cool.”

Like any good parody, the key was to play it straight. “It was important to get the timing right,” says Editor Travis Mitchell. “We drew inspiration from classic films of the era and their larger-than-life characters. The contrast makes it fun.”

Robins says that, while the spot is meant to appear low budget, below the surface, it’s quite sophisticated. “We put effort into every detail, including the sound design down to the way the chicken nuggets growl,” he explains. “The final mix is dense and layered. It’s the little stuff that makes the spot shine.”

Effress notes that the spot has earned cult status in Boulder. “It had tens of thousands of hits in its first few days,” she says. “That was a lot for a local sandwich shop.”

Winners of the AICP Awards will be announced July 27.