Where Are They Now?: RSP’s Brittany Herriman Credits Her Success to Passion and Determination

Adelaide, South Australia— As a Senior Data Wrangler at Rising Sun Pictures (RSP), Brittany Herriman helps keep the studio’s production pipeline running in high gear. Her role is to manage the vast amounts of data exchanged each day between RSP and motion pictures studios and other production partners. Media arriving at the studio must be accessible to artists working in various aspects of visual effects production. Finished work needs to be delivered on time and on spec to stakeholders around the globe.

It’s fast-paced, challenging work. “I love it,” she says. “Artists are typically assigned to one task on one part of a show, but I’m involved in every project, and I work on them from the very beginning through to the end.” In less than four years, Brittany has managed data for nearly a dozen film and television projects, including Black Widow, Jungle Cruise, Mortal Kombat, The Boys (Amazon Prime series), Thor: Ragnarok, Spider-Man: Far From Home, Dumbo, Captain Marvel and X-Men: Dark Phoenix. 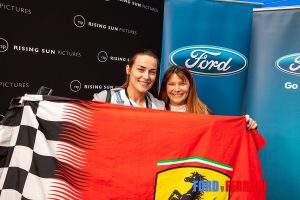 An Adelaide native, Brittany began her career in the health care industry, but wanted to find something that excited her passions. She enrolled at TAFE SA, earning an Advanced Diploma in Screen and Media in 2016, and then took a 10-week evening short course in Houdini delivered at RSP. That lit the fuse. Determined to make a career in the visual effects industry, she went on to complete the University of South Australia’s (UniSA) Graduate Certificate in Dynamic Effects & Lighting delivered at RSP the following year.

As a student at RSP, Brittany acquired the creative and technical skills necessary to get started in the industry. “It was really, really good,” she recalls. “My teachers were also artists at the studio. They taught us practical software skills as well as how a professional studio functions, the work ethic it requires and how to perform under pressure and meet deadlines.”

One of the aspects of the program she liked best was the chance to experience a professional working environment. “You get to go on the floor, observe artists at work and learn from them,” she recalls. “There is no better way to learn. It’s also a great networking opportunity. The artists you meet through the program might later recommend you for jobs.”

Upon completing the Graduate Certificate program, Brittany began sending out resumes and showreels and contacting studios in Adelaide and elsewhere. She initially interviewed with RSP for a rigging role, but a few months later was offered an entry-level position in the frontline department. Conscientious, focused and detail-oriented, she was a natural fit. A year later, she was promoted to her current role as a Senior Data Wrangler.

While data wrangling requires technical expertise, interpersonal skills are also vital. “You work closely with the artists and the client,” she explains. “You need to build strong relationships with everyone. It’s one of the things I enjoy most about my work.” 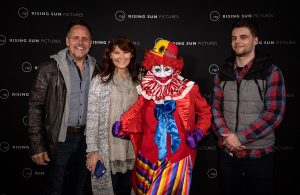 Brittany Herriman (in the clown suit) with her parents and husband at a screening of Animal World.

Brittany says the time she’s spent at RSP, both as a student and as a young professional, have provided her with the building blocks for a long and rewarding career. “I’m fortunate to have meaningful employment without having to leave Adelaide. I can celebrate the work I do with my family,” she says. “RSP has allowed me to take on a role where I can learn and progress. It’s also given me a skillset that could be applied to other areas of visual effects or production. There are a lot of opportunities out there that I might want to explore.”

It was just five years ago that Brittany took that first 10-week course at RSP. She says it would have been hard then to picture herself as a rising visual effects professional with a string of blockbuster movies on her resume. But, she insists, the path she took is open to others who share her determination. “Earning a Graduate Certificate is a good first step, but it doesn’t guarantee a job in the visual effects industry,” she notes. “You’ve got to be passionate and persistent, and you have to be ready to seize an opportunity when it pops up. I was fortunate to be given one and I’m thrilled I took advantage of it.”

The studio enjoys the advantage of being located in Adelaide, one of the world’s most liveable cities. That combined with its sterling reputation, and access to one of the largest and reliable rebates, has made it a magnet for filmmakers worldwide. This has propelled RSP to continued success and enabled them to contribute to a range of projects including Mortal Kombat, Black Widow, Ford V Ferrari, Spider-Man: Far from Home, X-Men: Dark Phoenix, Captain Marvel, Dumbo, The Predator, Tomb Raider, Peter Rabbit, Animal World, Thor: Ragnarok, Logan, Pan, the X-Men franchise and Game of Thrones.