The agreement unites two companies that have been making rapid strides to advance the art of film preservation and restoration and meet rising global demand. Originally founded in 1972 as a 16mm film laboratory, Colorlab has processed millions of feet of film, while expanding and evolving into a full-service facility with a global clientele. Prasad has been involved in film and video post-production for 65 years and, as owner of DFT (Digital Film Technology), holds IPs for the world’s best scanning systems, including Scanity HDR and OXScan 14K.

The Scanity HDR 4K Scanner sets the standard for excellence in scanning through its uncompromising ability to handle a range of difficult issues common in historically aged or damaged film. With optional WetGate technology, the system makes the process of handling fragile film elements smoother and safer. In filling surface deficiencies with fluid at the point of scan, it delivers near-perfect quality transfers, saving time and downstream processing, while significantly improving the results. 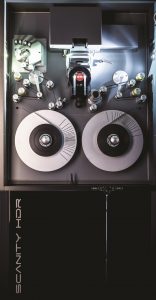 “Prasad is excited to introduce the Scanity HDR 4K Film Scanner with WetGate to the U.S. marketplace and thrilled to have Colorlab as our partner,” says Tracy Balsz, Vice President at Prasad Corp. “Together, we will supply the film community, on the East Coast and across the country, with an unsurpassed 16mm and 35mm digitization solution.”

Colorlab expects the Scanity HDR 4K Film Scanner with WetGate to be used to scan a wide range of archival media for preservation and monetization. The facility’s clients include major motion picture studios, institutional and private archives, independent producers and many others worldwide. “Our mission is to provide the best digital solutions in preservation and restoration of archival films,” says Thomas Aschenbach, Owner and President at Colorlab Corp. “Scanity HDR with WetGate is an exciting addition to our complement of solutions for archival film digitization.”

Prasad, North America, President Mark Smirnoff observes that the availability of high-quality scanning with WetGate technology is good news for everyone who cares about preserving film content. “Demand for preservation, restoration and remastering continues to grow,” he notes. “Our partnership with Colorlab creates a superlative new resource for meeting that demand with the industry’s best technology.”

Since 1972 Colorlab has operated just outside of Washington, DC in Rockville, Maryland. A full-service motion picture film lab processing, printing, digitizing and focusing on new and archival films. We bring the highest, best-researched standards of the industry to provide the most current services to our clients. Colorlab processes Super8, 16mm, and 35mm negative in color and black & white and provides workprints, answer prints and optical tracks. Colorlab services include digital intermediates or film-outs for 16mm & 35mm negative and direct to 35mm positive. We offer a range of services for compromised films as well as tape digitization, restoration and preservation to our global clients. www.Colorlab.com

Prasad Corp offers a comprehensive range of preservation, digitization and restoration services globally. As the owner of Digital Film Technology GmbH, it’s suitably placed to help with the ingest of complex archival film scanning projects both on-site and off-site. Prasad provides services, including but not limited to film preservation, film scanning of 8mm/16mm/35mm/65mm formats to 2K, 4K up to 14K resolution, digital film restoration, QC and metadata management. Prasad provides film digitization services from its Los Angeles office or through its partners in the US, with restoration services from our Chennai, India headquarters. For more visit – www.prasadcorp.com