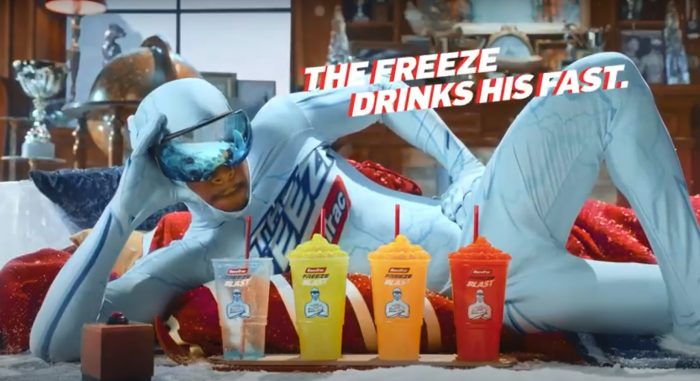 One spot challenges consumers to “Out Freeze The Freeze” by drinking a Freeze Blast in “the most creative way possible.” The drink’s namesake is shown in his trademark blue body suit in a winter lodge filled with comically icy memorabilia. As he consumes a drink in a single gulp, fans are encouraged to top him and share their approach on social media. “We’ve turned drinking a Freeze Blast into a form of self-expression,” explains R/GA Austin Creative Director Mona Hasan.

The campaign was directed by Hobby Film’s Magnus Renfors and shot in Sweden in conformity with Covid social distancing protocols. The creative teams from R/GA and 11 Dollar Bill attended the shoot remotely. “Technology made it seamless and super easy,” recalls Hasan. “We could see what we needed to see and communicate simultaneously with the director and the team from 11 Dollar Bill.”

A second spot is set in the same wood-paneled room and shows The Freeze rising out of a hole in ice that spreads wall-to-wall. The package also includes brief Tik Tok videos with The Freeze sharing offbeat  Freeze Blast recipes. “They are meant to look like consumer-generated content and so have a raw quality,” notes Robins. “They were fun to edit.”

“11 Dollar Bill was the perfect partner for this project,” notes Hasan. “They are detailed-oriented and able to produce a lot of content quickly, while adding an extra layer of creativity. They made a funny concept even funnier.”