The four finalists, announced at the Vaughn International Film Festival, include submissions from Hungary, Mexico, and the United States. They are Guiherme Somensato for “The World as One,” Daniel Sanchez Perez for “Nobel for ISS,” Tim Gerstner for “#NOBEL4ISS Equal Space Challenge,” and Sanchali Pothuru for “NOBEL4ISS.” Finalists receive AKG and Avid merchandise, courtesy of Harman Pro Group & AVID Technology.

Finalist entries can be viewed at https://vimeo.com/channels/nobel4iss 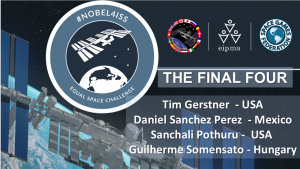 “The Equal Space Challenge provides young filmmakers with the opportunity to tell the world why the International Space Station deserves a Nobel Peace Prize,” said SGF founder Linda Rheinstein. “We are inspired by the many ways young people have found to tell this story of hope…at a time when the world needs more stories of hope.”

SGF believes that ISS merits the Nobel Peace Prize for its unique contributions to international cooperation and peace. Since astronauts first arrived in 2000, ISS has been visited by more than 230 spacecraft from more than a dozen nations.

EIPMA president Bernard Weiser said that the Equal Space Challenge furthers EIPMA’s mission to mentor aspiring entertainment industry talent. “We speak to students and others seeking to join our industry about the importance of being passionate about the stories they tell,” he observed. “For the past 22 years, ISS has been a shining example of global cooperation and peace.”

The Entertainment Industry Professionals Mentorship Alliance (EIPMA) provides expert guidance to young people seeking meaningful and productive careers in the entertainment industry. We are a coalition of trade groups and professional organizations involved in an array of behind-the-scenes art, craft and technology roles that support the magic of movies, television shows, music, games and other media. Our goal is to ensure the continued health and progress of our industry by nurturing its next generation of talent.

Drawing on the deep experience of our members, we act as a source for career information and counseling. We disseminate knowledge through public events, school programs, media outreach and direct mentorship. We believe in diversity and are committed to assisting individuals across all races, creeds and economic circumstances. Our goal is to serve as a bridge linking highly-accomplished, working professionals with those aspiring to follow in their footsteps. eipma.org

Space Games Federation® The international organizing and sanctioning body for competitions in zero/micro gravity, Sports in Space™ Equal Space™, played by Astroletes®, where the absence of gravity levels the playing fields, offering the human race the unprecedented opportunity to engage in a unique fusion of Space and Athletics. By providing structure and regulation, resources to test, explore and compete, bridge the gap between earth and space in the spirit of competition, Education, Community and fun in Equal Space.

Space Games is comprised of experts in the space, sports, education, science and entertainment industry, the team collectively envisions the past, present, and future of the space industry as invaluable to the human experience, at the same time marrying entertainment and education STEM Edutainment make this experience accessible to All. spacegamesfederation.com