CULVER CITY, CA— Mr. Wolf, a visual effects and finishing studio with facilities in Los Angeles, New York, Vancouver and Atlanta, is launching a division focused on commercials and other advertising media. The new venture will feature a brand new office in Los Angeles and be led by veteran Creative Director | VFX Lead Matt Motal and Executive Producer Pravina Sippy. The company is assembling an elite artist and support team who will provide high-end, boutique-style services to agencies and brands. 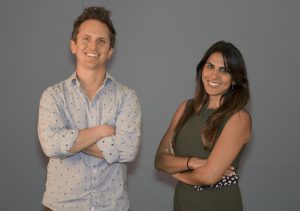 Mr. Wolf Executive Producer and Co-Founder Mike Pryor says that an uptick in advertising production and the availability of Motal and Sippy created the perfect opportunity to expand the company’s reach. “We’re excited to take on more advertising projects and the chance to do so with two legit rockstars made it a no-brainer,” he says. “We’re supporting Matt and Pravina with experienced talent, state-of-the-art resources and a space that’s custom tailored for artists and commercial clients.”

Motal and Sippy were formerly with Harbor Picture Company in Santa Monica and each brings more than a decade of experience in visual effects for advertising. Motal previously served as Senior Flame Artist at ArsenalFX, Santa Monica. His background also includes posts as Flame Artist at Mirada Studios and Motion Theory. His credits include work for Toyota, Dr Pepper, Target, Samsung and the NFL. Sippy previously spent 11 years at ArsenalFX where she was Senior Producer for visual effects and color.

Motal says that the decision to join Mr. Wolf grew out of his long-standing relationship with Danny Yoon, the company’s Senior Creative Director and Partner, noting that he worked with Yoon early in his career. “Danny and Mike are among the veterans of the industry and professionals of the highest integrity,” Motal observes. “I’ve been around long enough to know the value in aligning with great people.”

The new venture will allow Motal and Sippy to build a team focused on creative excellence and boutique service. “Our aim is to deliver high-end content and a delightful experience,” Sippy says. “We want to work with creatives on a more personal level than is possible at large shops. While it’s essential to bring projects in on schedule and on budget, we also want the process to be enjoyable and creative.”

Motal says that by employing a highly selective list of artists and state-of-the-art technology, the new team will be able to deliver exceptional results while containing budgets. “We are quite simply going to offer a better product,” he says. “When you have the best people using the fastest tools you are going to be more efficient.”

Mr. Wolf’s visual effects work has primarily centered on episodic content and independent features. Recent credits include dozens of projects across all major streaming services like Netflix, Amazon, Apple, and Hulu as well as network shows for CBS, FX, and CW. “Our goal for this new venture is not simply to expand, but to build a top-flight team,” says Pryor. “Our success is based on assembling talented, cohesive units at each of our facilities and providing them with the resources to be the best they can be.”