CHICAGO and BOULDER—11 Dollar Bill ended things on a high note in providing editorial, graphics design and post services for a new social campaign for Cheeba Chews, a maker of bite-size cannabis edibles. Conceived and produced by Piggyback Productions, Denver, the campaign consists of a series of weed-infused cooking videos with Nicole D., star of the TikTok series Dope Kitchen.

In the first in the series, Nicole presents her take on lemon meringue pie. She may not have Julia Child’s culinary skills, but she’s having a lot more fun as she flounces about a suburban kitchen, mixing eggs, sugar, corn starch and lemon juice. As she cooks, she carries on a goofy stoner banter, aided by a square of lemon meringue flavored Cheeba Chews. The campaign tagline is “Let’s Get Toasty.” 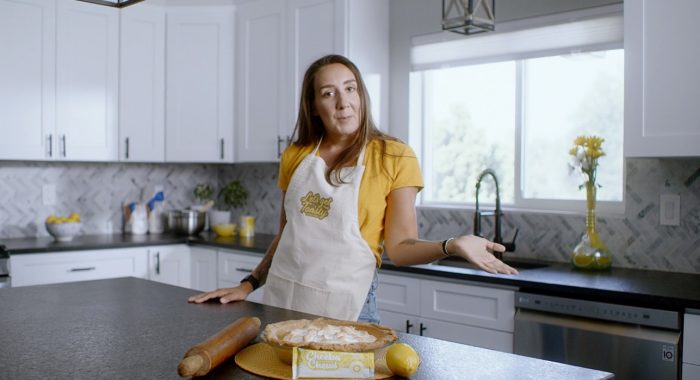 The campaign is designed to run counter to most advertising for cannabis products, which soberly pitch their health benefits. “There haven’t been many comedy campaigns for cannabis products,” explains Piggyback creative director Leigh Masters. “Cheeba Chews is an OG edible; it’s a cool, fun brand. Their customers get the humor.” Piggyback’s Leigh Masters and John Angelopulos wrote, produced and directed the campaign.

11 Dollar Bills’ Jess Weber edited the videos, giving them a funky, skewed rhythm that takes them out of the familiar cooking show realm. She also created an assortment of eccentric graphics and special effects that transport viewers into the alternate reality of Nicole’s mind. “Things get a little slower and a little weirder,” says Masters. “Those touches add to the quirkiness of the videos and make them even funnier.”

“Since they are social videos, we were able to push boundaries,” adds Weber. “It was a lot of fun to work with Leigh, John and their team who wanted to take risks.” 11 Dollar Bill’s Clark Jackson was the colorist on the campaign. The work was mixed at Floodgates Audio.

Angelopoulos credited Cheeba Chews for embracing a novel idea. “They encouraged us to push the envelope and trusted our sense for comedy,” he says. “The bigger the trust, the better the creative.”