NEW YORK CITY— Tick, Tick…Boom! is Pulitzer Prize and Tony Award winner Lin-Manuel Miranda’s magical adaptation of the autobiographical musical by Jonathan Larson, who revolutionized theater as the creator of Rent. In theaters November 12 from Netflix, the film finds Larson (played by Andrew Garfield), a promising theater composer on the cusp of his 30th birthday, navigating love, friendship and the pressures of life as an artist in New York City.

Fittingly for a film rooted in Broadway, post-production was largely completed in New York City by members of the Post New York Alliance (PNYA). Visual effects house Phosphene used its wizardry to reconstruct several of Larson’s hangouts from the 1990s and help the production overcome the challenges of filmmaking during the covid pandemic. Picture finishing, meanwhile, was executed wholly at Company 3, where award-winning colorist Stephen Nakamura worked with Miranda and cinematographer Alice Brooks, ASC to finetune the dreamlike imagery used to tell Larson’s story.

Production of Tick, Tick…Boom! began early in 2020 just as the covid pandemic was starting to spread across the globe and then had to pause when New York went into lockdown. Months later, when shooting resumed, it did so under rigorous health and safety measures that included restricting the number of proximity of people on the set. Those measures complicated the capturing of scenes in one of the film’s central locations, a small, Off Broadway theater where Garfield, as Larson, relates his story before a live audience. To shoot there safely, audience members had to be captured in small groups. “Audience shots are often captured in multiple passes, but this was much more complicated,” explains Phosphene’s John Bair, who served as visual effects supervisor. “Extras had to be shot separately from principals and we had to employ strategies such as keeping a group of actors isolated and in quarantine so that they could be used multiple times.”

For one scene, where Larson is visited by the ghostly shades of Broadway luminaries, each of the actors had to be captured individually and later assembled into a single scene by Phosphene artists.

The VFX team’s talents were applied in a more conventional manner to create certain iconic locations from Larson’s past. Artists rebuilt the rooftop of his apartment in Soho and the nearby Moondance Diner where he worked. “We constructed the entire environment surrounding the apartment building as it appeared in the early ‘90s,” recalls Bair. “It’s entirely CG to accommodate dynamic cameras moves from the live action.” 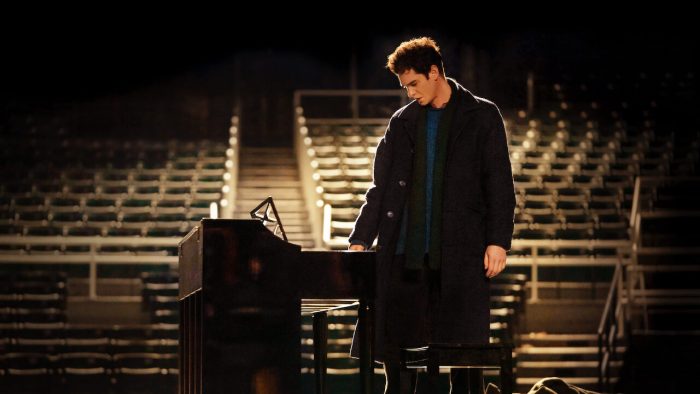 Similarly, artists recreated the environs of the Moondance Diner. “The building has changed radically since 1992,” says Bair. “Being local helped us take it back in time. We could get references from buildings that still exist.”

Company 3 delivered a full slate of post services from its facility on West 18th Street, including dailies processing, color grading, editorial finishing and deliverables. It also provided space and technology to picture editors Myron Kerstein and Andrew Weisblum and their crew.

During final grading sessions, Nakamura worked with Brooks to subtly tease out the emotional flavor of Larson’s world. “He was working as a waiter and very poor at the time,” Nakamura recalls. “Alice and Lin wanted to reflect his dreary surroundings in a gritty look. Nothing is polished or pretty. We applied a film grain to enhance the effect. Most of the movie has that vibe.”

Color is used in a rather unusual way in a sequence that alternates between Larson’s rundown apartment in Soho and one occupied by his friend Michael. “Michael works for an ad agency and lives in a very nice, high-rise apartment,” Nakamura explains. “Lin wanted the contrast, as we move from one space to the other, to have a visceral feel. I used the color warper feature in DaVinci Resolve to remove most of the color from Jonathan’s apartment while adding saturation to Michael’s place. It isn’t like transitioning from black & white to color, the effect is much cooler than that and you can really feel the difference.” 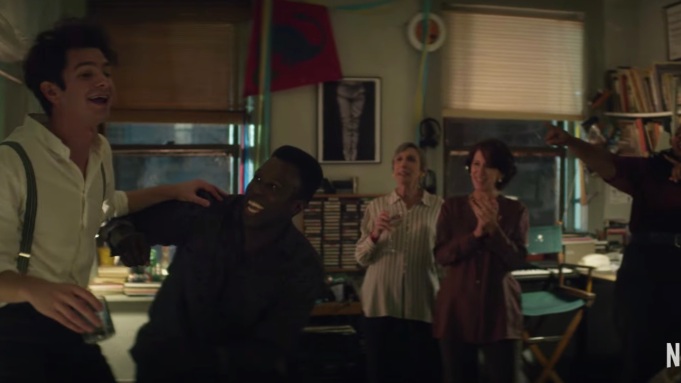 Bair says the whole project had a special feel. The camaraderie between different departments and vendors was unusually high, in part because they were telling a uniquely New York story at a time when the city was facing an unprecedented challenge. “Lin had a great creative team, including DP Alice Brooks, production designer Alex DiGerlando, editors Myron Kerstein and Andrew Weisblum,” he observes. “We worked with all of them, and everyone worked with a common purpose. Lin has strong opinions, but he made the most of the talent around him. Across the board, it was a fantastic experience.”