Adelaide, South Australia—Tony Clark, Managing Director at Rising Sun Pictures is an early pioneer who helped put Australian visual effects on the map; inspired a generation of visual effects artists and technologists; and, who innovated to solve common creative and technical problems which, in turn, catapulted the visual effects industry to be truly global.

An Emmy Award-winning Cinematographer, Tony’s early career included roles at Australia’s national broadcaster the ABC and Sky News in the UK, before he was a Director of Photography on Australian independent films. 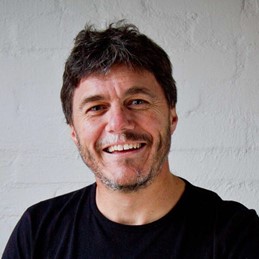 In 1995 Tony co-founded Rising Sun Pictures (RSP). Off the back of Terminator and Jurassic Park, Tony’s motivation was to create a visual effects company which combined his twin passions of art and technology, that could deliver VFX from anywhere in the world; in this instance, his hometown of Adelaide, South Australia, 8,000 miles (12,875 km) from Hollywood.

RSP worked on early local computer-generated animation before their first big Hollywood break. In 1999 Warner Bros.’ Red Planet, came to film in outback South Australia. A pitch to renowned VFX Supervisor Jeff Okun ensued, and RSP were given a crack on their first Hollywood project. Tony and the team must have done something right, as Warner Bros., returned with work on the Queen of the Damned.

Executive Vice President, Visual Effects at Warner Bros. Pictures, Anne Kolbe says of Clark, “Tony is a true innovator in the VFX community, and a trusted collaborator. His knowledge and insight into the process of creating spectacular visuals, both technically and creatively, is unparalleled.”

Shortly thereafter, Paramount Pictures were entrusting RSP with the shuttle re-entry on The Core, which ultimately led to the lead character of Charlotte in Charlotte’s Web. 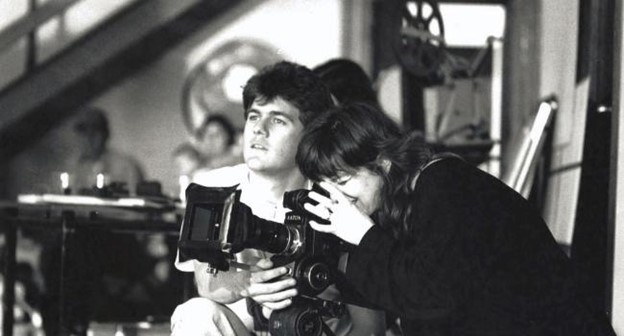 Tony Clark with Heather Croall on the documentary Imperial Crownings

RSP were always early adopters, pushing the boundaries of what could be done with the tools available and inventing those that weren’t, leading to the creation of new tools and several business endeavours.

Tony, himself is credited with multiple VFX Supervisor credits, including Sky Captain and the World of Tomorrow, Harry Potter and the Goblet of Fire, Pirates of the Caribbean: On Stranger Tides and Alfonso Cuarón’s Gravity. 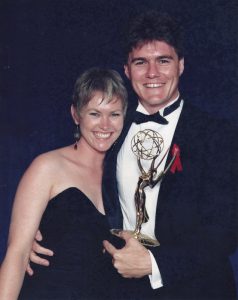 Tony Clark and partner Briony Hume at the Emmys in 1993

VFX Supervisor, Jake Morrison (Thor: Love & Thunder/Jungle Cruise/Thor: Ragnarok) values Tony’s collaborative nature saying, “Tony is both a firm friend and amazing collaborator! He has consistently put in place exactly the right team for each of our many collaborations – a highlight being the Valkyrie Flashback sequence in Thor: Ragnarok, something which is consistently referenced as some of the most beautiful imagery in that movie.”

Jake adds, “Tony’s background as a Director of Photography means I can speak to him clearly in the language of cinema and it’s hard to understate the importance that years of experience in the field brings. The outside world seems to regard VFX as being something that computers do. They could not be more wrong, it’s 100% artist-driven. Finding the right artists for the project is something Tony is a master of.”

RSP’s experiences in working remotely from global production centres led to numerous innovations.  In 2000, Tony led the charge in the creation of Rising Sun Research (RSR) in order to commercialise tools created within RSP. An early product, cineSpace, a filmncolour management solution that was critical in matching visual effects with on-set photography, was acquired by Cinetal Systems, and subsequently THX in 2011. However, RSR’s prime product was to become a global industry verb, ‘cineSync’.

cineSync was released in 2005, and enabled the secure collaboration of synced footage. The uptake on cineSync was organic and immediate and has been used by all the major filmmakers around the world.

RSR rebranded as Cospective in 2012 with Rory McGregor at the helm; Tony continued to serve as Co-Founder and Board member, and helped influence its development. In 2011 Tony, alongside Rory McGregor, Neil Wilson and Alan Rogers, received an Academy Scientific and Technical Award for the creation of cineSync. Cospective was acquired by ftrack in 2019. 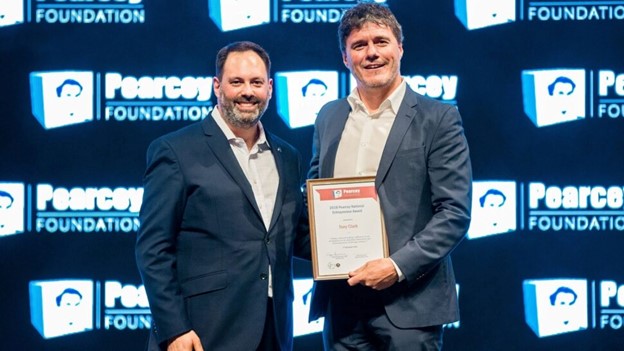 The Hon. Philip Dalidakis with Tony Clark at the Pearcey Foundation Awards

Wanting to improve access to high-speed internet for Australian filmmakers, Tony established Cinenet in 2004. This elastic broadband network allowed Australian content providers and filmmakers move huge files between Australia and California. In 2015 Cinenet was acquired by Superloop and Tony was seconded into a Non-Executive Director role which he continues today.

Tony has been a pivotal member of Australian Boards, including a role on the South Australian Film Corporation between 2007-2012,  Ausfilm between 2009-2021 and Royal Instuitute of Australia (RiAus) 2016 – present.

Netflix Director, APAC Studio and Production Affairs, Debra Richards, who worked with Tony when she was the Ausfilm CEO from 2011-2019 reflects on Tony’s contribution to the Ausfilm Board, “Tony Clark is an extraordinary, passionate and talented innovator, mentor and advisor who built a global award-winning business proving it can be done from anywhere in the world, and staying true to his beloved Adelaide.” 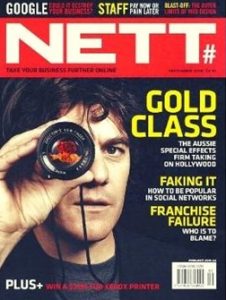 “Tony is a tireless and invaluable advocate for the business, the team, the work and the industry whether with Ausfilm colleagues, the Studios, government screen agencies or decision makers across the political spectrum – to ensure the Australian screen industry remains globally competitive from pre through to post-production. He’s a stalwart of the industry and if this business was a sporting code – he would be voted an ‘immortal’ of the game!” says Richards.

He served on the Board of Ausfilm alongside Animal Logic Co-Founder and CEO, Zareh Nalbandian. Tony was pivotal in leading efforts and initiatives for the creation of the federal Post, Digital, Visual Effects (PDV) Offset (tax incentive) to underpin Australian competitiveness in the global market.

After successful lobbying, the Australian Government announced a 15% PDV Offset to both location-based and offshore PDV projects. Tony served on the board of Ausfilm until 2021, supporting the evolution of Australian incentives to their current form.

Tony’s entrepreneurial and innovative spirit was recognised in 2018 with the Pearcey National Entrepreneur Award. The award recognises his inspiring leadership, innovation, acclaim and impact on the world stage.

Commenting on Mr Clark’s win at the time, the Pearcey Foundation’s SA Chair Susan Andrews said, “Tony Clark is an outstanding founder entrepreneur who over the past 20 plus years has taken big commercial risks, contributed to several important global innovations and continued to passionately grow the computer graphics and filmmaking industry in Australia and South Australia – all with outstanding humility, a sense of fairness and commitment to giving back to the community.”

Former RSP CEO and CEO of Culture Amp, Didier Elzinga says of Clark “I had the pleasure of growing up at RSP. Under his guidance I went from a junior sys admin to a compositor, supervisor and ultimately CEO of the company. Both cineSpace & cineSync were born because Tony came to me and said ‘do you think we could build this?’.”

“He has an uncanny knack for seeing what could be and then the smarts to bring it to life. Lessons that all helped inform me building Culture Amp in to a multi-billion-dollar company.”

In 2021 RSP became part of The Fuse Group (Fuse Group brings together three industry-leading visual effects studios: FuseFX, FOLKS, and Rising Sun Pictures and is a portfolio company of investment funds managed by EagleTree Capital). Of the sale, Tony said, “RSP was a privately held company for 26 years and it was time that we enabled its future success and facilitated its growth. Partnering with The Fuse Group and EagleTree Capital will enable us to become a bigger and better version of ourselves, achieve our full potential and create a future for the next generation of talent. I am excited to see where this takes us and the opportunities that ensue.”

Tony’s vision remains on long-term strategy for the organisations with which he is involved, and adapting the industry as a whole as he gets back to his entrepreneurial roots. RSP is investing heavily in Machine Learning and Tony is keen to fulfill The Fuse Group’s mission to create the next generation of visual effects facilities.

Of RSP, Tony says “RSP just keeps getting better and better – the talent, the work, tools technology, and collaboration – the quality and complexity we achieve is unbelievable. In the early 2000’s I couldn’t imagine RSP being bigger than 30 people. Now we have closer to 250 and by the end of 2022 we’ll have another 50, across 2 studios with the opening of our Brisbane office in South Bank.”

There is a boom ahead for the global industry as film production continues to cross-pollinate with like industries and that excites Clark, “Filmmaking is at a significant point of its evolution, with the huge demand for content, user experience and with the rapid advancements in technology, the next ten years will see an industry which has vastly transformed itself. It truly excites me to continue to drive that journey.”