Public broadcasting station’s first-ever sonic brand will be used across its sub-channels, programming and marketing media.

DALLAS—Stephen Arnold Music supported the rebranding of WETA PBS, a flagship public broadcasting station in the nation’s capital, by creating its first-ever sonic brand. The classically-inspired sonic signature, featuring a modern, upbeat sound performed on piano and strings, will be used alongside new visual branding on WETA and each of its five sub-channels (WETA-HD, WETA UK, PBS KIDS, WORLD and WETA METRO) as well as the popular WETA Classical superpower radio station. An abbreviated production slate is also utilized on WETA National Productions, which ranges from PBS NewsHour and Washington Week to Ken Burns documentaries. 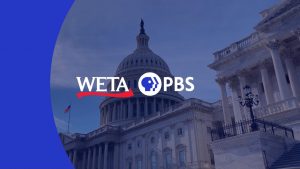 The sonic brand provides WETA with an instantly recognizable audio signature, while embracing its array of content and appealing to its diverse audience. “We set out to create something warm, inspiring and uplifting,” says WETA creative director Dylan Wilbur. “The sonic logo evokes WETA’s values, which include ‘trust,’ ‘intelligence’, ‘quality’ and ‘enrichment.’ WETA is different from commercial broadcasters in that many of its viewers are also supporters, and we wanted to convey the pride of ownership they feel for the station.”

Stephen Arnold Music employed a small group of chamber musicians for the principal recording sessions, using microphone and recording techniques to capture a spontaneous sound. “The result is an actual performance, providing an organic depth and richness not found in samples and processing,” explains Stephen Arnold Music creative director Chad Cook. “For example, the strings are performed with distinct articulations that give them more gallop and perk; the piano is played with a soft staccato.”

Stephen Arnold Music produced variations of the short-form signature to fit different time frames, uses and formats. The studio also adapted the sonic brand as a three-second signature for use in WETA original programming, as well as a five-second version used as an ID across main and subchannels. For WETA Classical, the studio produced multiple variants with the theme played by different solo and group instruments. “We recorded it with a string quartet, a string ensemble and a solo piano,” Cook recalls. “We also produced versions played on oboe, an English horn, a French horn and a flute. The radio station can sprinkle different instrument flavors throughout the day.”

Additionally, the studio produced a long-form anthem based on the sonic signature, specifically designed for branding promos, program teases and other core marketing media. “It gave us an opportunity to develop the theme and give it a cheerful lift,” says Cook. “We played with the emotions by tapping into not only the qualities of the instruments, but how those instruments are performed.”

About Stephen Arnold Music:
Often referred to as the most-heard, least-known composers in the world, Stephen Arnold Music’s creativity is experienced every day in more than 500 million homes worldwide.  Based in Dallas, Texas, The World Leader In Sonic Branding® has more than 25 years of success delivering impactful, brand-defining music that makes a difference for today’s top networks, cable channels, content creators, television stations, digital media outlets, production companies, corporations and advertising agencies.  With multiple Emmys, Addys and Promax Gold awards to their credit, Stephen Arnold Music’s specialized approach and commitment to the power of sonic branding, research, state-of-the-art production and unparalleled customer service is at the core of its promise. Stephen Arnold Music continues to set the creative bar in a highly competitive content landscape. For more information, please visit http://www.stephenarnoldmusic.com