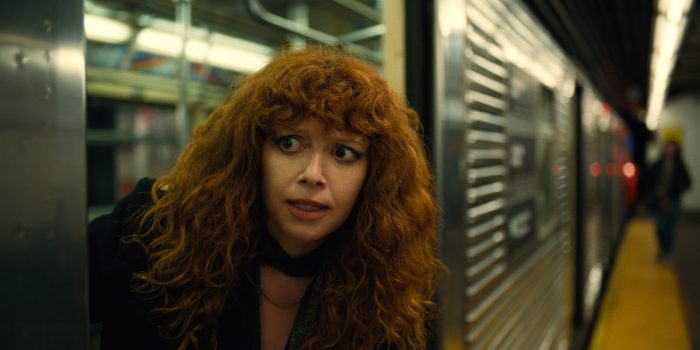 Most notably, BREAK+ENTER, led by VFX Supervisor Gabe Regentin, teamed with Lyonne, her production team, cinematographer Ula Pontikos and LED lighting specialist 4Wall Entertainment to recreate a large portion of the New York subway system using groundbreaking virtual production technology “Gabe and his team made a sweeping contribution to this season of Russian Doll,” says Lyonne. “His endless creativity, obsession with precision and meticulous eye for detail made for a very special and inspired collaboration.”

Russian Doll’s second season is set four years after the events of its 2019 debut where Lyonne’s character, Nadia Vulvokov, was caught in a time-loop that caused her to repeatedly relive the day of her death in a traffic accident. The new episodes take the story in a different time-bending direction as Nadia finds herself moving through time and space in a subway car. It uses that premise as a springboard to continue exploring “existential thematics through an often humorous and sci-fi lens.”

Although subway travel occurs frequently in season two, shooting on an actual operating subway train proved impractical. “It would have been hugely expensive and live trains would have been hard to control,” notes Pontikos. “We knew we needed to build a stage and explored green screen options, but ultimately rejected them. In the end, we pitched the idea of using a carriage on a platform and surrounding it with large LED screens. Actors would sit or stand inside the car as animated, CG backgrounds were displayed on the LED panels outside the windows to simulate motion.”

BREAK+ENTER was tasked with creating that background imagery. Artists built photoreal 3D replicas of the New York subway system, including stations, tunnels and other details. “BREAK+ENTER worked with the show’s art department in developing the CG assets,” Pontikos notes. “They went through trial and error to get the height right, determine the correct color space and work out other details. Part of the challenge was that we weren’t always inside the carriage. We also needed external shots to add texture to sequences…that required a whole different approach.” 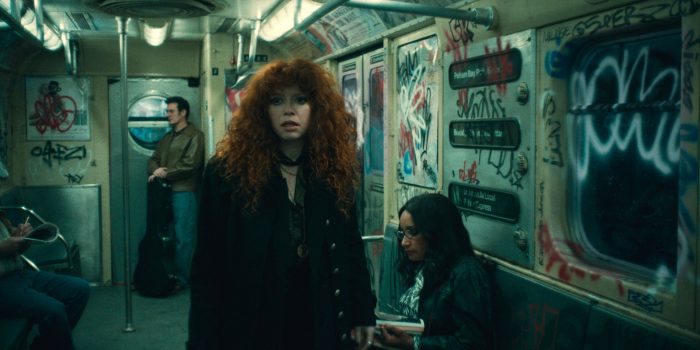 The CG models not only had to be highly realistic, they also had to be easy to control to provide the production team with the flexibility they needed while shooting. “We built the tunnel system in a procedural way,” says Regentin. “That allowed us to generate platforms and tunnel segments on the fly as needed. We created the environment in full 360 so that it could be projected onto the LED volume from any angle. Everywhere you looked, you felt like you were in a subway tunnel.”

The subway set was built on a stage in Brooklyn. New Jersey-based 4Wall Entertainment designed and built the LED walls and the disguise playback system used to display the pre-rendered CG backgrounds. “We finished the CG tunnel about a month before the shoot and spent two weeks testing the system,” Regentin recalls. “Everything had to line up, including the lighting and the color. We also experimented with different rendering speeds to make the animation feel correct with the proper amount of motion blur. There were all kinds of variables.”

The careful preparation paid off. “On production day, I sat with an iPad next to the techs who were driving the video sequence and gave them direction. It worked so well, we were able to shoot normally,” observes Pontikos. “It was just a matter of getting the exposure right and ensuring that the speed was correct. We also had to make sure the direction of the train was right and the timing of its arrival in the station was correct. In the end, it felt perfectly real.”

Series Director and Executive Producer Alex Buono was impressed. “All we had to say was ‘start the subway,’ and the seamless illusion of a moving car appeared,” he recalls. “We could choose the speed of the car, which platforms we pass and when other cars would stream by. Trying to do that with a real subway would have been insane.” 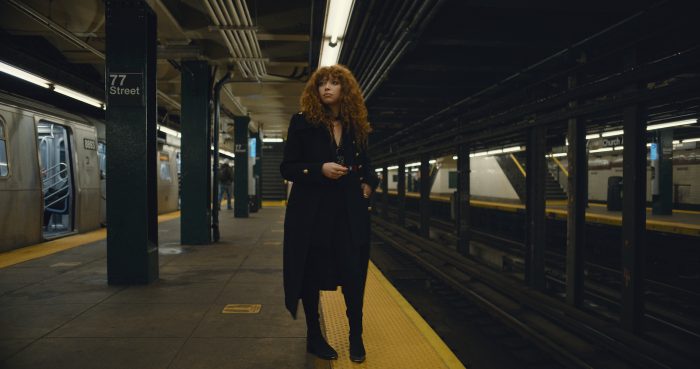 Buono adds that the illusion benefitted the actors’ performances. “It was a very organic experience for them,” he notes. “It’s a lot to ask of actors to be ‘in the moment’ when they are on a green screen stage surrounded by fake surfaces, but inside this LED world it was easy for them to believe they were in a moving car.”

Regentin was on the set both in New York and Budapest, overseeing the execution of visual effects shots. “We shot for a month in Budapest and got into some amazing locations you wouldn’t find anywhere else,” he recalls. “We were in tunnels deep below the ground and in cisterns with water up to our waists. In post, we used visual effects to heighten the unique aesthetics of those locations, adding lighting to give them an otherworldly feel.”

Throughout the project, BREAK+ENTER worked hand in hand with Lyonne, Buono and other members of the production staff to devise ways to add to the show’s comically trippy atmosphere. “Natasha and Alex were amazing partners,” Regentin says. “They leaned into the visual effects process and included us in the conversation”

Buono says that given the new season’s high concept, a tight-knit relationship with the visual effects provider was crucial. “Time travel is a big part of the narrative, and the visual effects were essential to creating that illusion in a convincing way,” he concludes. “BREAK+ENTER worked with us as partners in figuring out how to make it happen. They helped us turn back the clock on Astor Pace and make it the ‘80s again.”

Both seasons of Russian Doll and available on Netflix.

BREAK+ENTER has reimagined the film and episodic visual effects studio. Headquartered in New York City, B+E is fueled by global talent and cutting-edge technology, and powered by groundbreaking, a fully remote workflow. We make never-before-seen worlds spring to life, enhance practical locations, and create visuals that support, enhance and drive storytelling. From meticulous clean-up work to complex design, CG animation and compositing, our artists strive for excellence in every shot.