DALLAS— Stephen Arnold Music collaborated with KTLA to mark its 75th anniversary with an emotional and endearing anthem highlighting the station’s unique connection to the city of Los Angeles. Taking its name from the station’s familiar tagline “LA’s Very Own,” the song supports a multifaceted branding campaign focused on the city’s people and spirit, and KTLA’s role as its first and most trusted television station. 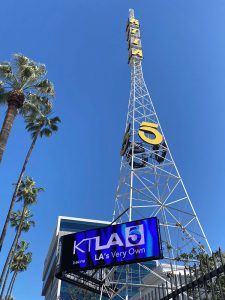 “Our community is incredibly large and diverse,” says Altus. “We’ve been a part of this city for a long time, we are very proud of it and we’re just getting started. We wanted to communicate that through the visuals and the song.”

Altus adds that the key to the campaign is its authenticity, noting that most of the visuals are not staged, but reflect real people and real events. The new song has the same genuine quality. “The creative team from Stephen Arnold Music understood immediately what we were looking for and produced a song that connects emotionally and is very melodic and memorable,” he observes. “It has real poetry to it. It’s absolutely on the money.”

Stephen Arnold Music Creative Director Chad Cook says the sentimental, acoustic guitar driven ballad evokes pride. “Few stations are as beloved as KTLA is in California,” he explains. “People have a true sense of endearment for the station, and we wanted to honor that through the tone of the song. It’s quite a bit more intimate than is typical in an image piece.”

Led by the guitar and vocal, the orchestration is spare but meticulously executed. “It’s not a heavily produced piece,” says Cook. “The song called for a sparse, acoustic style, but it hits all the emotional checkpoints.”

The song will be used in branding spots of varying length throughout KTLA’s landmark 75th year.

About Stephen Arnold Music:
Often referred to as the most-heard, least-known composers in the world, Stephen Arnold Music’s creativity is experienced every day in more than 500 million homes worldwide.  Based in Dallas, Texas, with additional studios in Santa Fe, New Mexico, The World Leader In Sonic Branding® has more than 25 years of success delivering impactful, brand-defining music that makes a difference for today’s top broadcast networks, cable channels, television stations, digital media outlets, production companies, corporations and advertising agencies.  With multiple Emmys, Addys and Promax Gold awards to their credit, Stephen Arnold Music’s specialized approach and commitment to the power of sonic branding, state-of-the-art production and unparalleled customer service is at the core of its promise. Stephen Arnold Music continues to set the creative bar in a highly competitive content landscape. For more information, please visit http://www.stephenarnoldmusic.com