Culver City, Calif.– Bullet Train, from Sony Pictures and Director David Leitch centers on an unlucky assassin named Ladybug (Brad Pitt), determined to do his job peacefully after one too many gigs gone off the rails. Fate, however, has other plans as Ladybug’s latest mission puts him on a collision course with lethal adversaries from around the globe —all with connected, yet conflicting, objectives— on the world’s fastest train. The end of the line is just the beginning in this non-stop thrill-ride through modern-day Japan. With a screenplay by Zak Olkewicz based on the book by Kotaro Isaka, the film is produced by Kelly McCormick, David Leitch and Antoine Fuqua. The all-star cast also includes Joey King, Aaron Taylor-Johnson, Brian Tyree Henry, Andrew Koji, Hiroyuki Sanada, Michael Shannon, Benito A Martínez Ocasio and Sandra Bullock.

Post-production sound for Bullet Train was based at Sony Pictures Post Production Services and presented a myriad of creative opportunities through its furious action, whip-smart comedy, crackling dialogue and ripping-good story. The veteran sound team engaged in a lively collaboration with Leitch, McCormick, Editor Elísabet Ronaldsdóttir and Composer Dominic Lewis. The result is a non-stop thrill ride, a treat for both the eye and the ear. 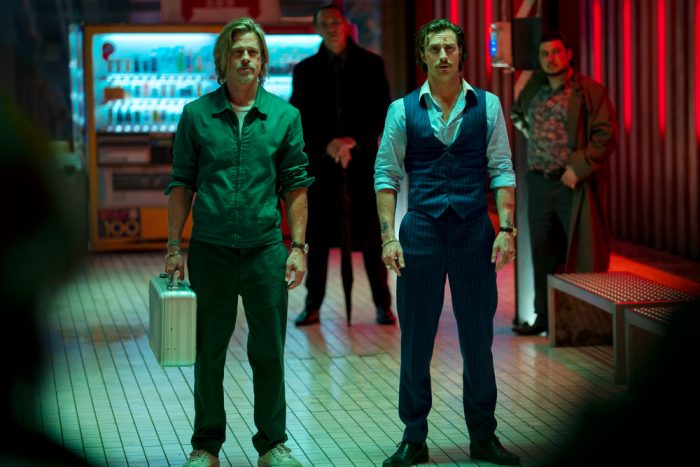 “Everything about this film is larger than life,” observes Supervising Sound Editor Mark P. Stoeckinger, whose previous collaborations with Leitch include John Wick, John Wick: Chapter 2, Atomic Blonde, Deadpool 2 and Fast and Furious Presents: Hobbs & Shaw. “The comedy and the action are over the top and blended together. Even the most intense fight scenes have comic touches. In the middle of a shootout, you might hear a hubcap rolling around with a funny twang. The sound—like the film itself—has a sense of humor.” Other lead members of the crew included Re-Recording Mixers Frank A. Montaño and Jon Taylor, and Sound Designers Geoffrey Rubay and Luke Gibleon.

Sound post-production began with Stoeckinger and his sound editors developing sonic treatments in tandem with Ronaldsdóttir and her crew. “The sound team’s work elevated what we had already done with the images,” explains Ronaldsdóttir, who is also a veteran of Leitch’s previous films. “Mark does that exceptionally well. He is intelligent, fun to work with and a complete sound nerd—which is just what we needed. Even something as simple as a door opening has a purpose. Every detail helps propel the story forward. What Mark and his team brought to this was mind-blowing.”

The most persistent sound element in the film is the train itself, modeled after the astonishingly fast trains of Japan’s high-speed shinkansen railway system—known for their signature whoosh. Sound Designer Geoffrey Rubay, who led the development of the train’s sound, studied recordings of actual bullet trains and used them as a point of departure. “In the real world, bullet trains are quiet and smooth. Once the train leaves the platform and picks up speed, the ride smooths out. You feel like you’re riding on air,” notes Rubay. “Our aim was to recreate the feeling of gliding through space at super high speed and take it into a heightened reality—to make it awesome.” 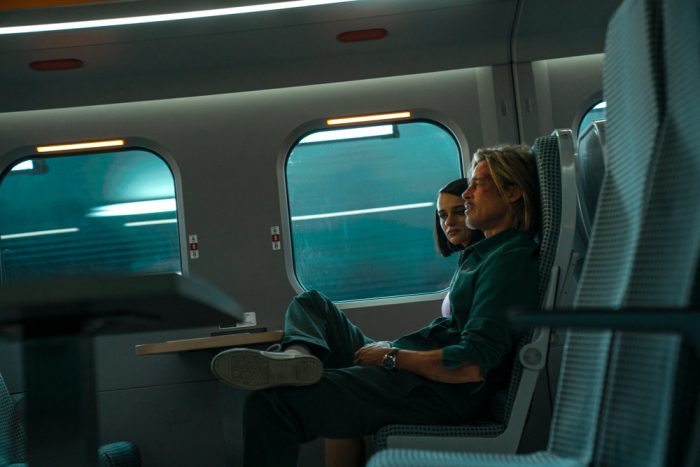 The sound of the train plays subliminally through much of the film, but it’s hardly monolithic. Rubay developed individual sound treatments for the train’s engine and each of its cars, as well as its varying speed and the locations it passes through. “When the doors open, you hear a particular beep and a rush of air. Depending on how close the camera is, you might hear the station,” he relates. “Each station is different and corresponds to the specific location where the train happens to be along the line. It’s intricate and accurate.”

The sound effects not only conger the atmosphere of the train, they also punctuate the story. “Geoff created a pallet of sounds that are subtly laced throughout,” notes Stoeckinger. “Hundreds, even thousands, of individual sounds are used to convey a sense of movement, but it’s never obvious. It makes you feel as though you are riding on a train without taking you out of the moment.”

Along with the ubiquitous train, the film features virtual non-stop action. As one would expect from a story of a group of assassins determined to kill one another, fistfights, gun battles and swordplay happen all the time and occur in escalating form. 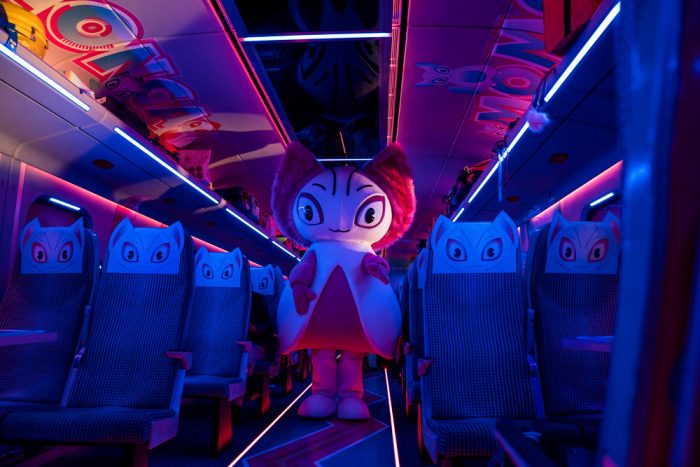 And yet, Bullet Train differs from other action films in the way the violence plays out, according to Luke Gibleon, who designed sound for the action sequences. “The violence is aggressive, but not bone-crunching,” he explains. “One of my favorite scenes is a fight between Ladybug and Lemon that breaks out in the Quiet Car. They are punching and kicking but pause briefly when a woman passenger shooshes them. Throughout that scene, we underplayed the movement and fight sounds to show they are trying hard not to make noise. We also added pan whooshes tied to camera movement and chair squeaks to further bring out the comedy.”

Sound effects enhance comic moments throughout the film. Gibleon used jetting and swirling water to support the train’s high-tech toilet (where Ladybug hides a venomous snake) and a mix of toy-like noises to breathe life into the anime-inspired “Momomon” character who roams the train and pops up at unexpected moments. “It’s a very silly character and we had a lot of fun with it,” Gibleon observes. “You hear him at different times and places, even when he’s not onscreen. He might appear on a TV in the background of a scene that is otherwise dead silent. You can watch this movie over and over and each time catch something new.”

Pre-dubbing was done in the William Holden Theater at Sony Pictures in Culver City, while the final soundtrack was mixed in Dolby Atmos in the studio’s Kim Novak Theater. “It was a very challenging film to mix because it occurs entirely on a train,” says Montano. “It has a consistent ambiance, yet there are many subtle textures as you move from car to car, interior to exterior. The action is intense and often way out there, but it also has wacky moments. Our approach was to use the immersive Atmos sound environment to keep things fun, moving, coherent and entertaining for the audience.” 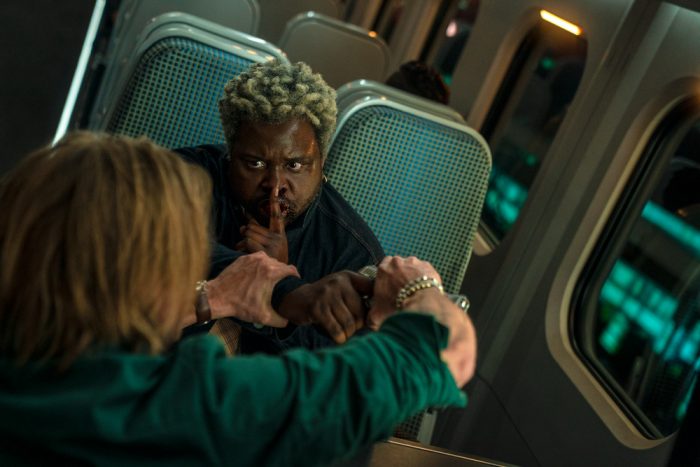 The mix team took special care with dialogue tracks to ensure the actors’ banter punched through the surrounding action. Taylor credited Production Mixer Peter Devlin with capturing excellent dialogue in difficult circumstances. “The shoot was mainly confined to small compartments corresponding to the various train cars,” Taylor explains. “Peter had very little room to move and different crew were involved in every shot. Capturing pristine sound was nearly impossible, and yet he did it.”

The task for Montano and Taylor was to find a way to blend the dialogue with the ever-present sound effects and music in a way that was both natural and clear. “You need to hear every word while maintaining the spontaneity and fun,” explains Taylor. “And on this film, we had actors speaking with Cockney accents and in Japanese. It took a lot of work to ensure that nothing was so loud that it got in the way of the performances.”

Montano says the mix involved a very tricky balancing act. “In almost every scene, the music is going, the effects are going and the dialogue is rapid fire, but our focus was always on storytelling,” he insists. “We’d bob and weave. We tried to keep things exciting. We might adjust the timbre of the sound to keep it from conflicting with the energy of the dialogue, or we might share surround information to clear the voiceover through a particularly difficult sequence. At every turn, we faced a different challenge, but we’ve been around a long time and know what to do.”

Stoeckinger says the entire sound crew was inspired by the opportunity to create a unique cinematic adventure and responded with their best efforts. “Bullet Train is a great example of collaboration, of a lot of people marching toward the same goal,” he says. “It takes a village. Everyone has a role, everyone has ideas and no one needs to be micromanaged. It was a very satisfying experience.”